I know that I’ve passed my 30th birthday milestone, and that I should feel like an adult, but oftentimes I feel the same as I’ve always felt: perpetually uncool, with a penchant for staying at home to read books rather than going out clubbing, or whatever the youths these days do. Basically, like my high-school self.

I mean, my body feels pretty much the same as it always has (I continue to eat relatively well and I work out regularly). I still hang out with my best friend since pre-school, and I ride the grocery cart back to my car to make the shopping trip suck a little less. In my brain, I’m a (much-better-adjusted, less-hormonal) 16-year-old girl, despite owning a business and paying taxes and being married and all that jazz. When Walt and I bought a car by writing a check a few years back, I still had the feeling that I was playing dress-up as an adult. I didn’t believe it, myself.

However, I’ve never felt as much like a grown-up until this week, when a relatively boring thing happened.

I bought a trash can. And I was really happy about it.

Only grown-ups get really excited about trash cans. Can you imagine your actual 16-year-old self getting excited about a trash can? I am thinking back to that age and no, I really can’t.

Our cats, clever and perpetually hungry creatures, learned how to get into our previously invincible trash can at night. We’d had this problem before, so I bought a can with a locking lid, and for a while that was fine. Then they began knocking it over at night, like little kitty thugs cornering a convenience store, and tore at the plastic bag that tucked over the upper lip. We would wake up to a little tornado of shredded bag, granola bar wrappers, and bread crusts with the leftover salami eaten off. (And fatter kitties.)

So we bungee-corded the trash can to a little buffet table and locked the lid at night. They would pull at the plastic hanging over the lip of the can and drag it out, little by little, a fishing net of cat-tastic delights. We’d pop into the kitchen in the morning and see the bag sliced to ribbons hanging off of the side of the upright can, and have to replace the bag, only to have it happen again. We were using four or five bags to hold one bag’s worth of trash. 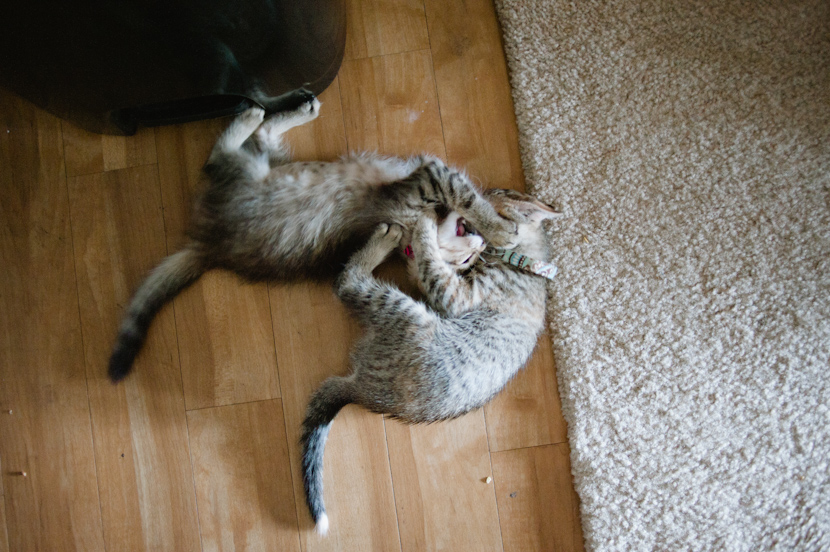 They were sly, these cats. I should add that our cats are not grazers; they’re emotional over-eaters who we’d overfed the first two years of their lives and now they’re on permanent diets. They’re given 1/4 cup of food to share morning and night, and after they’ve eaten their meager helpings they beg for more. They probably thought the smelly bag of leftovers was a night-time offering, that if they were smart enough to solve the puzzle they should gobble up the prizes.

Finally, we tried to push the bag into the bin at night so no plastic was visible. The bungee cord had hugged the can tight against the buffet table and pushed the lid forward on its hinge, so the lock was no longer effective. Like raccoons, the cats lifted the lid while we were asleep and ate the contents of our garbage. We would wander out for breakfast and lift the lid to drop in our egg shells, and the pockmarked bag would be sitting at the bottom of the can, smushed with the weight of two overweight cats prowling for their second dinner, spilling crumbs.

So I went online and asked my friends what sort of trash can solution we’d need. We don’t have a pantry so we couldn’t lock our trash up at night; our cabinets are already full so we didn’t want an under-the-sink drawer for our solution. A conversation that would have bored us to tears when we were 15 — I can just imagine our inner youth’s faces: “Trash cans? OMG, yawnnn!” — ended up getting over fifty comments as recommendations poured in.

In the end, I went to Bed Bath and Beyond (another grown-ups only store; you’re initiated into its ranks when you go there during Dorm Week to buy shower caddies and foldable laundry hampers) to buy a triple-digit-dollar trash can with a 20% off coupon. A garbage receptacle that you’d pay over $100 for? Check. But you’re being conscientious about your money and will wait for a coupon to show up? Check. Adult, adult. 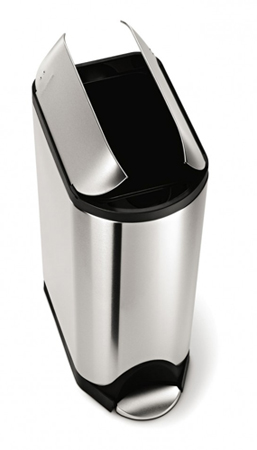 We unwrapped it and stuck it in a corner. The cats gave it a once-over and eyed it warily. This newfangled can is stainless steel instead of plastic; has a butterfly, split lid; the bag tucks inside an inner bin so no plastic is visible or accessible from the outside. I waited for them to figure out how to crack its code. I imagined feeling smug about our purchase for a few days, a week… then waking up one morning to find that the cats had gouged through its defenses.

But until then, I’ve been stepping on the heavy pedal and tossing my typical kitchen junk into it. And feeling pretty pleased with myself. And then feeling old because an appliance is bringing me some amount of pleasure. And then remembering I felt the same way about my vacuum cleaner when we upgraded from a craptastic Hoover Widepath Tempo to a Miele Twist. When you’re young and just out of college and you have little money, you “get by” with things. Target rug, hand-me-down vacuum, your dorm leftovers. When you’re an adult, I’ve decided, you can improve your life with helpful gadgets and gizmos.

Note: the photos of the kitties are actually my friend Cat’s cats that I photographed in 2012. They are fat, furry monsters now.

We made the exact same purchase this year and I was really crazy happy about it too!!’ Hahaha. Glad I’m not alone!

Oh man, I feel you on so many levels.

3. My dumb dog loves to eat all sorts of things he shouldn’t. And he’s smart, too, for a dummy. We had to buy the step/pedal trash cans AND turn them to face the wall in order to stop him.

I know, 30 crept up on me! I type it out and feel ancient, but when I’m just sitting around inhabiting my body I don’t feel that old. I guess we’re as young as our bodies feel :)

I remember being ridiculously excited when we got a trash can that attached to the door under the sink. I thought it was amazing and would open the door repeatedly to see it slide out. And then, I felt really old.

This is hilarious and true, and I’m glad you specified that those are not your cats because I was really confused for a minute. :P

They were my “cat” stock photo, ha! I haven’t photographed my own kitties with a “nice” camera for a while… they’re all on my phone and I wanted to share a prettier photo :)