Working For Yourself | -1 Week

I am less than one week away from leaving my cubicle and I’ve been having mixed emotions. I honestly thought that I would be over-the-moon excited to quit my day job, and I am! but another part of me is quietly freaking out as all of the pieces come together and the dream is becoming reality. Talking to Payroll about my final paycheck. Scheduling my exit interview with HR. Figuring out the logistics of hopping onto Walt’s insurance. Did I mention that we’re moving apartments when our lease is up at the end of July, so we’re thinking about security deposits and tentatively looking at places? And that we just bought a car — an unexpected expense?

One week ago I was sitting on the couch crying because it was all so overwhelming. Yes, I hate this job. Yes, it drags my soul down to the bottom of my stomach. Yes, it’s a dead end. But it’s a paycheck — a steady, reliable paycheck. Am I a fool for quitting when so many others covet what I have? I often berate myself for not being grateful enough, or acknowledging how good of a life I actually lead. It’s been really easy to focus on the negative — which, apparently, any 8-5 with bureaucratic nonsense is bound to have in droves.

Two weeks ago, Walt got into a wreck on his new scooter. On Tuesday, he walked into the apartment and said, “I think I want a motorcycle jacket for my birthday.” Cue me, looking up quizzically; him, showing me his skinned forearms. We’d just bought that scooter a week before, to replace his older 50cc which had just given out. After we washed his wounds and bound them with about fifteen Band-Aids — we didn’t have a first aid kit with cotton bandages — Walt confided, “I don’t think I can ride a scooter again.” So we began to search for a car. I’ve never been crazy about Walt riding around on that tiny Yamaha with all those giant trucks, but a car is a significant amount of money.

So I sat on the couch and cried. What was I doing, walking away from a salary — from money, the lifeblood of our society — to pursue some silly idea of a dream?

Walt sat next to me and told me, “You are not stupid for leaving this job. You wouldn’t have lasted much longer there. You have no idea how glad I am that you can quit to do something you love.” It’s true. I was barely hanging on by a thread by the time Walt landed his job. I was exhausted, sick, and no matter what I did, my acne was raging. Ever since giving notice, my skin has cleared up considerably. Life seems much sunnier, more buoyant. I feel lighter. I didn’t even realize how heavy the burden — the burden of money — was on my shoulders until it was lifted. Until my knight in khakis took the load right off of me. Until I realized that the endless, dark days of repetition, of sitting in that flickeringly-lit cubicle, had an expiration date. Until I knew for a fact that there would be a day when I wouldn’t have to set a toe in that building ever again.

What I’d failed to realize until then, was that it’s not just me bringing in paychecks anymore. I’d been working two jobs for so long that it felt like the burden to produce this car was going to be fully on my shoulders, and I didn’t think I could do it. Hence me sitting on the couch sniffling and feeling this sense of “Oh my goodness, this is going to crush me.” I thought about all the bookings I’d have to accrue, all the hours at the agency, that would mean paying off this massive debt, all before we’d even figured out what car we were going to buy. And it’s funny, because my sense of frugality (aside from random nail polish purchases), and Walt’s compliance with my budget-setting, essentially makes us hoarders: we had enough in the bank to pay for our new (used) Honda. I’m manic about having money in our savings account, and Walt said, “For what? To pull out in times of emergencies? To pay off a car in full without having to take out a loan? I think we’re doing just fine.” Walt talks me off of all sorts of proverbial ledges with his pragmatism.

I allowed myself that one freak-out, dried my eyes, and went to check out a car with my husband. 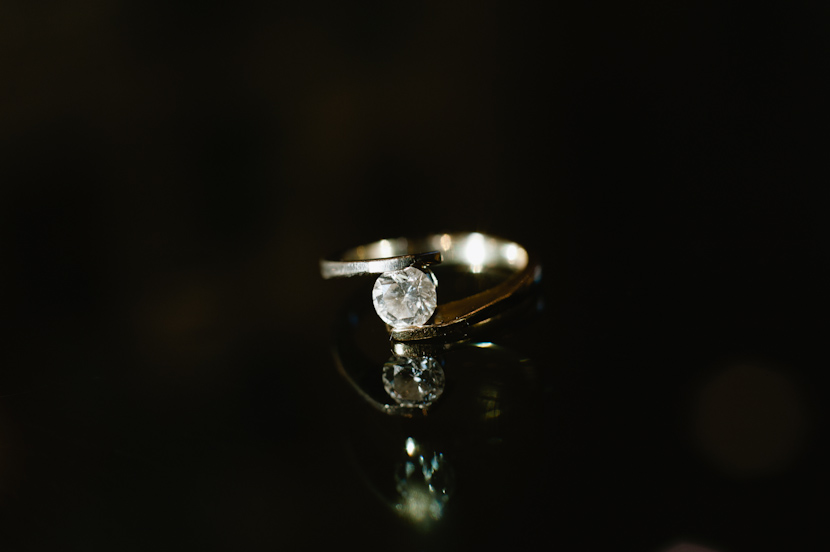 A beautiful, custom-made engagement ring worn by Angelica. We shot her bridal session last week and this is the only photo I can show until August!

We wrestle with this kind of stuff every day here too…what can we spend, when, how much…it can easily become overwhelming. Hang in there and stay positive Elissa!

I love this. Walt sounds very much like James in terms of talking a little sense into our over-thinking/over-analyzing minds… ;-) You two will be just fine! I can’t wait to see all you do!!!!

It’s completely cliche, but anything worth doing is scary. And almost three years into this full time photography thing, and I still have panic attacks about it sometimes. You are incredibly talented and clearly have the required business-smarts to do this thing right, and I know you are going to be successful. SO proud of you, Elissa.

Alex and I seriously had the same conversation like two days ago.(As our car broke down and needed repairs, while also paying security deposits and last and first months rent and a move to Vermont! EEEK!) I’ve been the chief breadwinner for so long that I forget that now he’ll be able to help and I don’t need to freak out. It’s freeing and super scary. T-Minus 14 days! Cheers to you and following the dream out of the cubicle! :-)

I’m so happy and excited for you that you’re doing this! You are going to rock it, I know it. You have serious, major talent. Obviously.

That ring is GORGEOUS!!! And don’t worry girl, you’ve got this.