Those of you who know me know that I’m a big Pride and Prejudice fan. The last time I wrote about P&P, I blasted the 2005 version and unequivocally stated my undying love for the 1995 BBC version.

But recently… the sheen has worn off a little. I was re-watching the BBC mini-series for the umpteenth time with my friend Caroline and started to feel weird about it. (Side note: it’s a little jarring to watch P&P with someone named Caroline, who yells at the Caroline in the story — “Caroline! Why are you such a B?!!” I’m glad my name is uncommon because I’m not sure how I’d react if one of the biggest antagonists of a favorite novel had my name as well…) The more Caroline and I heckled the mini-series, the more it started to crumble at the edges. I still love it, but I’m not sure if I love it. (Which makes me sad.)

The BBC version is a wonderful adaptation of the novel. But there are awkward moments that scratch at the façade. Let’s hash it out.

Wickham is supposed to be this gorgeous hunk, right? He’s supposed to have “all the appearance of goodness” but with a wicked heart. But the BBC cast Adrian Lukis, easily 10 years older than he’s supposed to be, who looks like the uncle you don’t want to hang out with. At least the 2005 version cast Rupert Friend, who is believably handsome and pleasant-looking, and — oh yeah — young.

You have the old ’90s cinematography, which — to my obsessively visual mind (you know, being a photographer and all) — is somewhat awkward and jittery compared to the smooth art that happens to be in the ’05 version. There are a few moments that always make me cringe in the ’95: Darcy, super-imposed on Lizzie’s mirror, saying “I shall leave you now,” and walking out of it; Mrs. Bennet hugging the side of one frame as she rapturously kisses her new son-in-law; the flat boredom of Lizzie standing on a cliff saying “Beautiful,” when the landscape is just a bunch of hills.

The visuals in the Joe Wright version are gorgeous. Rolling hills, golden sunsets, shallow depth-of-field, rich colors. Even when I ranted about how much I couldn’t stand Keira Knightley I was admiring the prettiness. (The next 2 shots are from the 2005 version found through Google Image search.) 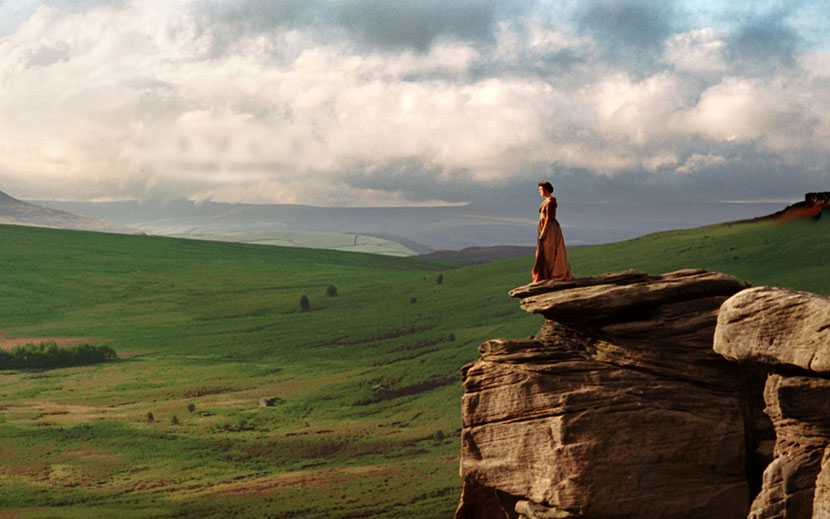 For the longest time, I resisted the new Darcy. When it was announced in the early 00s that Matthew Macfadyen was going to slip on Colin Firth’s shoes and become Darcy, I actually snorted in my journal, “Matthew WHO?” And I will admit, for the past 8 years I have not liked him in the role. Firth was the perfect Darcy. That is, until I watched a TV show called Spooks. See, Spooks (or “MI-5,” as it’s called in America — you can see it on Netflix!) follows the [somewhat doomed] lives of British spies. Macfadyen played one such spy in the first few seasons of the series and it turned my opinion of him upside-down. He’s vulnerable; he’s sad; he has pretty blue eyes! Great voice, nice hair, and all of the sudden, boom, heartthrob! Suddenly, watching him as Darcy wasn’t so bad.

This isn’t to say that I love him more than Firth in the role… rather, I appreciate Macfadyen more as an actor, so I can appreciate him as Darcy. He’s not the Darcy, but he’s a good Darcy. And that’s okay too.

Man, that looks like an image I’d love to have shot. Maybe that’s where the attraction come in.

However, I don’t hate it as I once did. I accept it for what it is. It has its good and its bad.

Have you ever watched a movie so many times that you started to poke holes in the way it was filmed or the choice of actors? Have you ever changed your mind about a movie you once despised?

I’m so glad you mentioned your “issues” with the 2005 P&P. Here’s my feedback:
– Lydia is self-aware. She knows she’s doing something wrong and that’s why she’s doing it. She’s a young brat who wants to go against her parents/society wishes b/c it’s edgy and makes her so much cooler and dangerous. It’s the classic archetype of the young girl who wants the dangerous boy. I don’t know why you would think BookLydia was clueless, but there’s a lot in the book especially her time with the troops before seeking out Wickham that suggests she knows and seeks that kind of danger and wrongness.
-I agree with your assessment of the Charlotte situation and it’s the one thing that bothered me as well and felt out of character for the BookCharlotte who was meek and incredibly practical.
– Actually, that is still one of the best uses of symbolic meaning that I’ve seen for the movies. Of course Lizzy is vain and self-absorbed. Why else would she be seeking to put her family out of a potential match by declining the proposal of one of the richest men in the county? Why else would she be seeking a beautiful young thang in Wickham rather than accept Mr. Darcy or Mr. Collins. She’s selfish and cruel and it’s the one time it’s revealed in a subtle way.

So glad to talk about it and we need to re-read and have a book club about it! :-D

Liz – Interesting!! I never thought of Lydia that way (and I’ve reread the book a lot)… I interpreted her as someone who is brash and impulsive, who does what she wants and doesn’t think about what the consequences of her actions would be. To me she always seemed unaware, wandering around doing what she feels like doing. But how could she want the “dangerous boy” when no one knew how dangerous Wickham was? Her mother was encouraging the girls to get with soldiers, wasn’t she? So her choosing Wickham was kind of an implicit nod from Mrs. Bennet. Now I’m going to have to re-read the book AGAIN with your words in mind to see if I missed something.

As to Elizabeth… I feel as though Lizzie is self-absorbed, but more because of self-preservation than vanity. She can’t stand the two men who have proposed to her and she feels a kindred spirit in Wickham. I don’t think she’s cruel, she’s just independent. *thinks* But maybe I’m taking all of this too much at Lizzie’s face value, since that is what she tells Lady Catherine (that she’s trying to live her own life and wants to be happy without having to answer to anybody else (paraphrased))… Hmm.

Okay, Liz, we’re going to have to talk about this over cake. I’ll re-read and then we can make a date, haha!

Can I just say that that last 2005 shot is one of my favorite from the film? And every time, I wish I’d taken that shot.