It’s no secret that I am madly in love with the 1995 BBC production of Pride and Prejudice (starring Colin Firth and Jennifer Ehle). I’ve mentioned many, many times that I love re-watching the mini-series every few months. It’s one of those things in life that makes the world right itself again, much like sriracha-doused pho, hot baths in hotel rooms, and “makin’ fists with your toes” in carpet after traveling long distances.

My friend Andrea introduced me to the Colin Firth version of P&P in high school. She invited me over for a sleepover and we watched the entire 5-hour series in one go. For her senior yearbook photo, she Photoshopped Jennifer Ehle’s face out of the final wedding screenshot with Mr. Darcy. I didn’t get it. I appreciated the story, of course, but why the hubbub? And, to be honest, I still don’t understand why Bridget Jones squeals when Mr. Darcy dives into his estate’s pond. Colin Firth is so much more dapper when he’s fully dressed and wearing his fabulous hats, in my humble opinion. 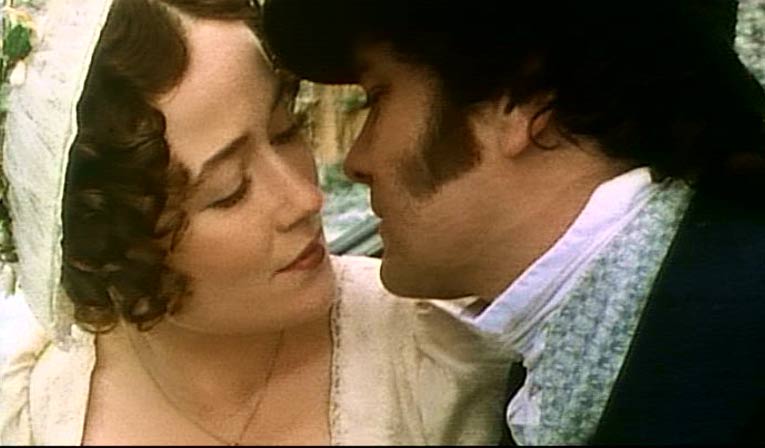 My first year in college, I took a feminist writing course. The syllabus included works by George Eliot, Jeanette Winterson, and Jane Austen. We read Pride and Prejudice the novel, and now when I re-read it (about once every year or so), I find myself giggling at all the new witticisms that I’ve missed or forgotten in prior reads. It’s a gift that keeps on giving.

I honestly think the mini-series is just as good as the book, and shows all the subtleties of the story to the surface without being obvious about it. I can watch the series and always find something new to appreciate. This last showing: did they have nail polish back in the Regency era? I just noticed Mrs. Bennet has some pearly pink fingernails in the last half hour of the story.

When the “new” Pride and Prejudice starring Keira Knightley was announced, I didn’t know if I would like it. Let’s face it: Firth is the perfect Darcy. What could pretty-boy Matthew MacFadyen do better than Colin “the King” Firth? I understand that the story was truncated to fit a 2-hour screen time, and that it was punched up for Hollywood audiences, and dumbed down so that people not as esoteric as Andrea or myself could understand why it was scandalous that Lydia ran off with an officer or why Mr. Collins was trying to win Lizzy’s hand, but in doing so it lost so much magic. When I saw the 2005 P&P, I was so severely disappointed. Keira was such an overdramatic Lizzy. Miss Elizabeth Bennet would NEVER stare at herself in the mirror for hours in a trance! Come on, now!

The chemistry between Ehle and Firth is so perfect. You can sense her dislike at the beginning, and his intrigue… her peaked interest while at Pemberley, and his softened earnestness… her despair at Lydia’s ruin, and his gentle concern… The entire time you’re rooting for them to grow, and to love each other, and when it finally happens, it’s wonderful!

Colin Firth makes me want to hug a pillow and eat chocolate and be in love forever. Matthew MacFadyen? He is tolerable, I suppose, but not handsome enough to tempt me.

I love pride and prejudice but hasn’t seen this one.. gotta add it to my netflix queue.

Well now you’ve gone and done it. You’ve opened the flood gates to my specific realm of expertise… film and novel analysis and Jane Austen (I’ve taken two Jane Austen classes, one happened to be on location in England).

I have to say the mini-series is wonderful and Colin Firth will always be the perfect Mr. Darcy. And Bridget Jones squeals b/c he’s hot and wet… ;-). Btw, so glad to see you’ve actually read the Bridget Jones novel and not just seen the movie. :-D

So on to your criticisms of the movie. This is where I diverge. I actually thought that the film was an accurate representation of the FEEL and emotion of the time. The story and character representation was a bit different b/c of the constraints, but the subtle looks by Matthew McFayden revealing Darcy’s deep interest in Lizzy and Keira Knightley’s portrayal of Lizzy’s petulant attitude reveal the deeper secret that Austen was trying to communicate. Lizzy is being a totally selfish brat according to Edwardian standards. She should marry the first well established man that proposes to her in order to support herself and her family, but instead she refuses TWO proposals. She’s dramatic and emotional, something a novel heroine always seems to be i.e. Pamela, I felt Keira communicated that nicely. What’s so unique about Austen is that she takes the typical heroine and then turns them on their head. She’s always satirizing her own genre.

Darcy falls in love with Lizzy this petulant child. This is where I feel the P&P miniseries fails and the movie excels. Matthew McFayden gives these soulful looks and these moments of almost heartbreak that you can tell he’s in love with this girl from the start but knows it’s wrong and he’s tormented by it to the point of proposing in absolutely the worst way in a frenzy of emotion. Colin Firth communicates this soulfulness in the second half, but before the first proposal it’s not there with the same gusto which ends up feeling like it’s a surprise that he wanted to marry her when he proposes the first time. I felt the movie took advantage of the blank spots in the novel and really played up visually the subtext that was present. So now you have these two emotional characters who have to become the standard rational Edwardian that Austen transforms them into. I feel the miniseries does a better job of this, whereas the film mutes their emotionality, but doesn’t transform them into rational people. So combine the two and I think you have P&P the novel.

Either way I understand your love for the miniseries and I would love to rewatch it over and over again. I’ll have to get that Bluray as well. Hmmm Valentine’s present? :-D

Ahh Liz, I’m going to have to write you a novel back!

You make excellent points, especially about the “feel” of the 2005 movie. It’s beautifully shot (I’ll even admit that I used a promotional photo of Keira standing on the hills as a desktop background for a while in 2005) and the colors, lighting, mood, all fit the story very well. There are swoon-y moments that exist off the page in the book but appear on the screen in the 2005 movie, like Bingley actually proposing to Jane, and a more heartfelt declaration of Darcy’s love at the end, which I appreciated. And you’re right — Lizzy was being incredibly selfish. HOWEVER! And this is a personal preference of course… I like to LIKE my heroines. I can tell that Lizzy is being childish and too independent for the times, but I can’t help but root for her to be that way because I can relate to the idea of a “comfortable” life married to a person I can’t stand, to be one of my worst nightmares. I think the mini-series helped us see life from Lizzy’s angle (sure, Mr. Collins isn’t THAT bad… but to be married to him would be AWFUL; similarly, Mr. Darcy (at first) is such a jerk, of course we don’t want to be anywhere near him), whereas the 2005 version showed life one step back from Lizzy’s perspective (so we can see that she is acting unbecomingly).

There is also something to be said about what I’m used to… if I do the math correctly, and I watch the mini-series over again 4x a year, and I’ve been watching it that many times since I was 17, that adds up to about… oh, 40 times? I can anticipate all the moments, I love seeing the story unfold again and again in the same way I’ve loved it for 10 years, and Colin Firth never ages. I’d take that over a new adaptation any day.

Let it be known that I tried to like the 2005 version! I saw it once in theaters and several times on DVD since it came out. Each time I attempted to like it for more than the cinematography. But every time I finished the movie, it felt over-acted, and Keira never fully became Lizzy for me, which is distracting.

And now a concession: I did not like the 1995 casting for Wickham; he was not nearly as handsome as he should have been!

And yes, get your man to buy you that Bluray! It’s remastered and so pretty!