Ask and ye shall receive! After lamenting that I was running out of things to blog, Walt simply said, “Me.” And I suppose I haven’t written much about Walt here besides our wedding, so here’s our “How We Met” story. It’s probably more suited for Valentine’s Day, but I’m doing something called “Groom’s Week” all next week (sharing some of my favorite photos from second-shooting weddings that I haven’t posted yet) so stay tuned for that — and sit back and enjoy this adorable tale…

Let’s roll the hands of the clock back, back, back; back to the days when I was in college… I lived with two of my friends in a little house in north campus, and I had a year of school left to go before I got my degree. My hourly requirements were on the low side each semester, so I stuffed them with things that interested me (Vampires in Slavic Cultures class, for instance. Or a weight-lifting course), but I decided to help both my bank account and my waistline by getting a job at an ice cream store a block away from where I lived.

I was skinny and purple-haired and told the manager that my favorite movie was Wayne’s World. He told me that he liked my style and invited me to join the team.

No, this manager was not Walt. But yes, our story begins with ice cream.

The Amy’s culture is steeped in being weird, having fun, doing crazy tricks with ice cream, and, ultimately, great customer service. With eccentric hair, I fit in right away. My coworkers taught me how to balance ice cream on spades and throw the balls of treats up in the air and catch them in a cup. Every year, Amy’s has a competition among stores and employees to see who is the best at making up these elaborate tricks and catching the cream (it’s called the Trick Olympics).

One night, I was working with my coworker George when a tall, lean, curly-haired boy came into our shop.

The boy said, “I work at Sixth. Do you mind if I step behind the counter and make some ice cream? I just left my store and forgot to bring some home for my roommate.”

We said of course, and stepped into the back. The shop was dead-empty except for us workers, and I peeped around the wall to watch since there was nothing else to do. He threw the spades into the air to shake off the excess water. He threw one spade behind his back and caught it. He dug into the freezer, withdrew a hunk of dark chocolate ice cream, and slapped it rhythmically against the boards as he mashed in the candy. His skills were so impressive, so much better than anything I’d seen my coworkers do, that I stared at him in astonishment as he balled up the cream, tossed it in the air several different ways, caught the ball easily in a sundae bowl, and snapped on a lid.

Bam. Attracted. Not that I wanted to be.

We had mutual friends, apparently. One of my coworkers, Eran, was good friends with one of Walt’s coworkers, Drew, and all three hung out and did “guy things,” like play video games. I tried to play matchmaker between Eran and my roommate by inviting them both out to a bar with a crowd. A big group of us ended up at the Ginger Man and Walt was there. He and I ended up talking about everything… ice cream, history (we are both history nerds), life. He was witty, he was smart, he was friendly, he was cute. Goodness, he was cute.

I told my boyfriend that I was attracted to someone else. Because yes — I was dating someone at the time. He was a good person, a nice boyfriend, someone steady. But in my heart I knew that he wasn’t the One, and meeting Walt was the final shove to make me realize it and end that relationship. Was I a bad person? Sometimes I think so… it was obviously my fault that he and I broke up. That being said, the relationship probably would not have lasted forever, and that man is now happily married to somebody else, and Walt and I are together and happy, so it was for the best. I didn’t sneak around and I was up-front about my feelings. Sometimes, life just happens, I guess.

The thing is, I didn’t know how Walt felt about me. He was friendly, for sure, but if he was giving off any hint that he liked me back, it was too subtle for me to recognize it. It turns out that he’d noticed me on campus two years before, when I lived in the dorms. If that’s not good memory… 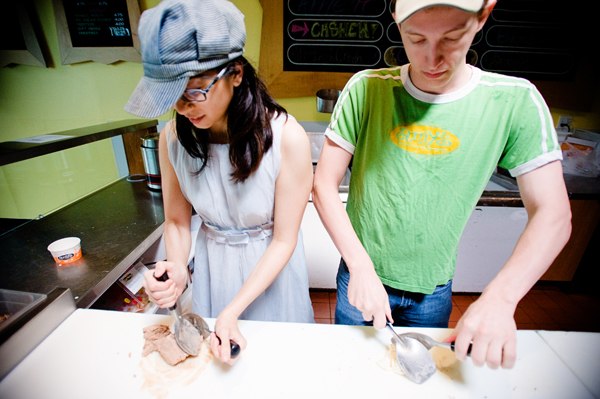 So how did we become a couple? Out of the blue, my manager texted me and asked, “How did your date with Walt go?”

I squinted at the phone. “Huh? What date? Date with who?”

“With Walt. I heard from one of the delivery drivers that you two were spotted getting cozy the other night.”

Thinking that the delivery driver had seen me at the Ginger Man in mid-conversation with Walt while in our group bar hangout, I wrote back, “A lot of other people were there too!”

But it turns out that this driver saw just two people. A Walt lookalike and an Elissa lookalike, sitting somewhere in a romantic restaurant, alone. I have to stress that this didn’t happen. Furthermore, the driver asked Walt point-blank how his date was, and used my name. I was mortified that Walt would think that I made up a rumor we’d gone out. How pathetic would that be?

It gave me an excuse to talk to him again, though. Walt likes to make fun of all the little pretenses I created to start conversations with him.

It took bent metal for us to finally start dating. I was over at Drew’s apartment for a while, watching the guys play video games, until late in the night. (This was college, after all. Staying up past midnight was a normal, everyday occurrence.) When I finally decided to go home, I was so tired that I scraped the side of my car against a concrete pole in the parking garage. Resigned to the fact that I was probably too sleepy to operate a car, I went back inside and crashed on the couch. We shared our first kiss that night. Awwww squeeee! 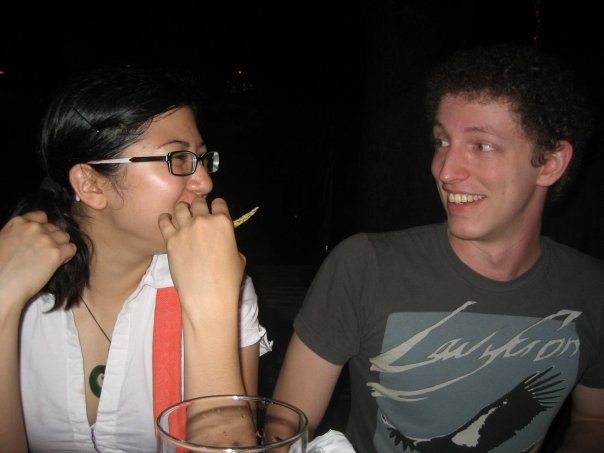 Some couples have incredibly sweet, romantic stories. My parents, for instance? My dad followed my mom to Japan every year for close to a decade before she agreed to an international marriage. Walt and me? We met over ice cream and started dating after I scraped the paint off my driver’s-side door. Not the kind of stuff you find in storybooks, but it’s still our story, and we’re happy. So :)

Love reading this story. You’ve inspired me to write mine up someday! :)

ICE CREAM TRICKERY!! I did not know this was a thing. And there it is. (Awww!)

A) This is probably my favorite of all of your blog posts to date.
B) Your story is awesome.
C) WALT HAS MAD SKILLZZZZZ.
D) The picture of you two making ice cream is amazing.