Last week, A Practical Wedding posted my parents’ wedding story as a “Vintage Wedding.” The post, which was written by my father and edited for brevity by the APW staff, was a long time coming. As soon as the Vintage Weddings sub-feature was introduced at APW, I hounded my parents to write their story so I could submit it. After all, from what I knew about their wedding, it was an amazing love story that called for persistence, patience, and trust.

I’d always known bits and pieces of the most popular parts of my parents’ love story — my father, the yearbook photographer, bumping into my mother while taking photos. Him, totally smitten. Her, not allowed to date since she was a Japanese exchange student. A constant back-and-forth, trans-Pacific romance. When I think about it too much, I realize that my sister and I might have never existed were it not for my dad’s determination.

But I hadn’t known all of the details, and I found that by asking I got to learn their love story the way it actually happened, and for that I’m amazingly grateful.

So here is a special post written by my dad… 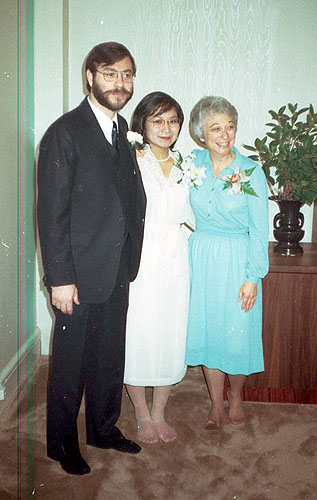 Reiko and I met in suburban Minneapolis in the Fall of 1971, about two months after she arrived in the United States from her native Japan as a Rotary Exchange Student.  We met regularly and experienced High School together.  We couldn’t call it dating because she was on an exchange program and the sponsor forbade it, but together we shivered through ski-jump meets, downhill skiing, and other outdoor winter activities (and now you know why your mother wants to live in a warm climate).

I made my first trip to Japan in 1973.  At 19 (she is older than I), looking over the waters of Lake Chuzenji toward Nantai-yama, we talked about our future together.  To my proposal, she did not say yes.  Most importantly, she did not say no.

For seven years, several trips I made to Japan, several trips she made here, a few dozen letters (it took almost a week for even an airmail letter) we courted. In the end, both Reiko and her family agreed that we could marry, the governments agreed (it took some prodding) and she bought a one-way ticket on Pan Am’s nonstop from Tokyo to New York where I was living and working at the time.

[In 1980] I met Reiko at Customs at JFK and we drove into the city to my very tiny apartment in a huge sky-scraper across the street from a large hospital. Neither of us was hungry.  She was jet lagged, but had eaten on the plane.  I was tired and had eaten some hospital food. We had a simple but meaningful talk over a cup of very bad instant coffee, and celebrate that date (it is the date engraved in our rings) as the beginning of our lives together and forever. 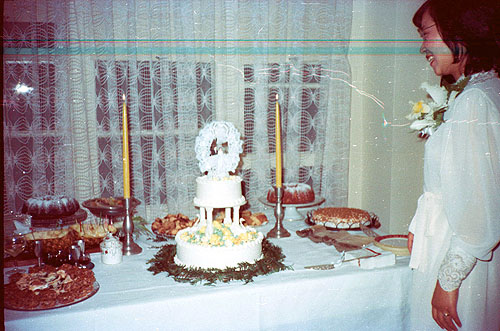 Some weeks after our commitment to each other, we asked my mother’s uncle to meet us at the New York County (Manhattan) Marriage Bureau where we were legally married by a judge. A passer-by in one of the corridors outside the Judge’s office used my 6×6 camera to make a photo record of us as we looked that day as photos weren’t allowed in Chamber.  My great-uncle took the train home to New Jersey, we took a subway up-town, and with the time-clocked and signed marriage license safely stored in an envelope, we took dinner out with the rest of my work team.

In committing to each other, we satisfied my requirements for a wedding.  In the legal paperwork, we satisfied the conditions of the visa on which Reiko traveled to the USA and safeguarded many of her legal rights should something happen to me.  Reiko asked to be married in a temple of her denomination of Buddhism, of which there was only one in New York City.  It happened to be staffed by a Priest who was new to the area and so did not have legal authority to sign a marriage certificate, which authorization we didn’t need as we were already legally married.  So, we started to plan a wedding. 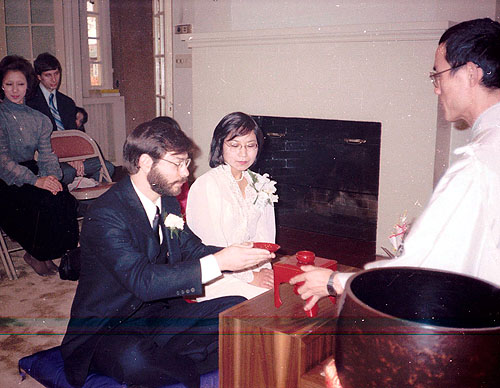 We resolved that it would be practical.  We wanted a meaningful ceremony, participation of friends, expediency, ease of planning and execution, minimal expense, and long-lasting investments. Invitations were hand lettered and addressed by Reiko or me on good paper.  We decided to use informal cards as Thank-You notes — again hand lettered. The temple provided the place for the ceremony.  Unlike similar temples in Japan, our guests could sit on chairs, not the floor, but we would be seated on zabutons [Japanese floor pillows] on the floor in front of the priest.

My aunt offered her apartment for the reception, which limited the size of the celebration to about 30 people.  We trimmed the guest list to just people in the New York City area, with the exception of asking some of my family in Washington, DC, Connecticut, and New Jersey to drive in.  The only person who flew in was my mother, who lived in the mid-west.

In the few months she lived in New York before the ceremony, Reiko made friends with a number of the Japanese ex-pat community.  We invited many of them to share the day with us. One of Reiko’s friends immigrated from Japan to New York to open his own restaurant.  He was still in the process of finding his space when he offered to cook Japanese food for our reception for just the cost of materials.  He promised some variety, but couldn’t be more precise until he found out what kinds of fish would be available the day of the ceremony, so we trusted him.

We realized that we needed a kosher foods selection for folks who couldn’t eat Japanese.  We found a deli within walking distance of the apartment and ordered a selection.  Disposable plates and utensils solved the problem of making the dishes kosher. 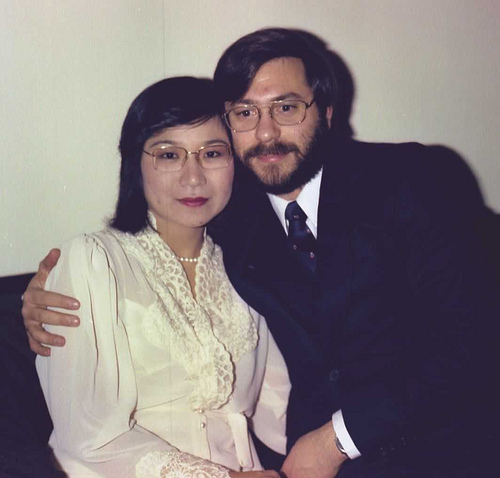 The cake was a standard model from the bakery around the corner. The Buddhist ceremony we used doesn’t call for attendants, so we had no brides-maids or groomsmen. We shopped for a diamond on 42nd St.  We narrowed the selection to two stones, took a cup of coffee to talk over the decision, and she chose the smaller one because it looked better on her hand.  We also shopped wedding rings there and had the pleasure of watching the jeweler make the bands and engrave them. For clothing, we turned first to my uncle, who traded in the garnet business and sold a line of bride’s dresses and accessories.  Reiko didn’t like anything in his line, so he referred us to one of his customers, where she found a white ‘dressy-dress.’  It didn’t look ‘bridal,’ but was white, formal, and could be used on later occasions. I needed a suit, so we shopped at original manufacturer’s outlets and settled on a deep blue winter weight wool 3-piece that I could use for business after the wedding.

We were gifted flowers, nothing “fancy,” just a bouquet or two that made it to the temple and the reception.

We didn’t hire a photographer… The pictures we have are gifts of our guests who made prints from their own negs.

And we didn’t hire a band .. We played some soft background music with my Aunt’s hi-fi, but mostly hoped our guests, who came from two very different corners of the world and traditions could talk over food and drink and have a pleasant afternoon.

In the end, it was a gentle celebration.  The chef “made the party” with a selection of Japanese foods (there were leftovers of the kosher food, not of the Japanese).  The setting and group were small enough that everyone had a chance to talk with each other.  And we are still married more than 30 years later. 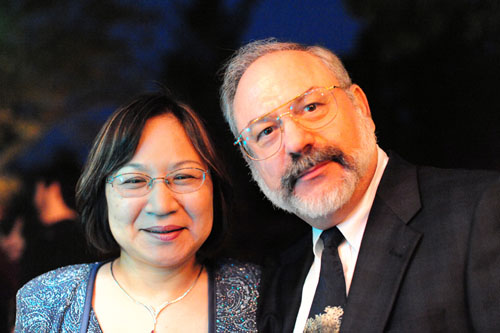 Photos of the wedding: friends and family
Current photo: taken by Matt Mullenweg at my own wedding 2 years ago

Enjoyed your parents wedding story, wonderful pictures shared by friends and the latest one from your wedding tied the story into a loving wedding knot! Thanks for sharing. Diana