October 10 | My Own Real Wedding | Personal

Because today is my one-year anniversary with my wonderful husband Walt, I thought it appropriate to share my own wedding story.

As I counted down the days to this anniversary date, I started thinking again about marriage and what it means to me. Walt has been so supportive of my own personal goals, and I feel that I’ve been supportive of his hopes and dreams. I used to think marriage was about two people coming together to become one entity — a reason why I didn’t think marriage was for me, until I met Walter — but then I realized that marriage is more of a support system, where we help each other become the best possible versions of ourselves we can be. We are not WaltAndElissa, we are Walt: the best Walt possible with support from Elissa, and Elissa: the best possible Elissa with support from Walt.

So the beginning of our marriage was not about the venue, the cake, the flowers, the music, the food, the dress, the shoes, the rings, the whatever. It was about us coming together and saying that yes, we loved each other, and yes, we wanted to be together and support each other and make each other happy. If we had gotten married in a government office with a few family members looking on as witnesses, I would’ve been happy to do that (and skip the planning altogether), but as it is, I am glad that we had the type of wedding we had, and I wouldn’t change anything at all.

* Note that all photographs here are by Nessa K. and have been used with permission from the photographer.

Let’s get it out in the open right now: I was a budget bride — one with an Excel spreadsheet and a lot of free time to research for the best deals. I was never one of those girls who dreamed about her wedding day and I only enjoyed the planning once I crossed the abyss of allotting our money to the best possible options. A few were easy: Walt’s parents generously donated their yard for the wedding site, I considered only one photographer, I bought a prom dress off the internet and it only needed hemming, I used Etsy for our jewelry, and I tasted only one cupcake vendor who made vegan cakes before saying, “Yep. These are perfect.” (I can’t handle butter too well, hence the vegan.)

Some were difficult: we could not find a caterer that was reasonable and we only nailed down the food 17 days before the ceremony, with Hill Country Pasta swooping in at the last minute and saving my sanity. I also spent a lot of time hand-making little organza flowers to hang down from the branches of a tree in the middle of my in-laws’ backyard that I dubbed “the weddin’ tree.” I don’t know if that actually kept me too busy to realize how crazy I was being… or if it was just crazy.

We took the traditions we liked and discarded the rest. Bouquets? Nah, I don’t really feel like holding flowers. Only the father walks the bride down the aisle? No, I think I’ll have my mom by my side too. Cake-cutting? We had cupcakes and they were available to take at the beginning of the mealtime buffet. I fed myself my own cupcake. Garter-toss? I didn’t even bother to get one. Walk down the aisle? It made more sense to walk around the side of the house, in front of the guests, than to walk in between their seats.

Miscellaneous touches: We set up a Ustream account to broadcast our wedding in realtime so that family and friends who couldn’t travel or otherwise couldn’t make it to our wedding would be able to watch it happen live (I have a lot of family in Japan). We Rick-rolled everyone at the end of the ceremony by playing “Never Gonna Give You Up” as our recessional song. Walt’s vows to me included two references to farts. Our rings, bought from different etsy vendors, were very inexpensive.

And instead of dancing at the end of the night, we had a toast-making competition. Walt and I aren’t very good dancers, so we had people make fun of us instead. It was great.

I was mostly calm the morning of the wedding. The bridesmaids and groomsmen came over early to help set up, and my friend Cat and I spent a good chunk of time unraveling my organza garlands. It was somewhat calming to pick out knots in the ribbon while my stomach was starting to do loop-de-loops inside me.

Our photographer and her second arrived after a little bit and we got ready. The girls spent a lot of time on own hair and makeup. The boys ironed their shirts and then tapped the keg. Here we are, all dolled up and ready to go: 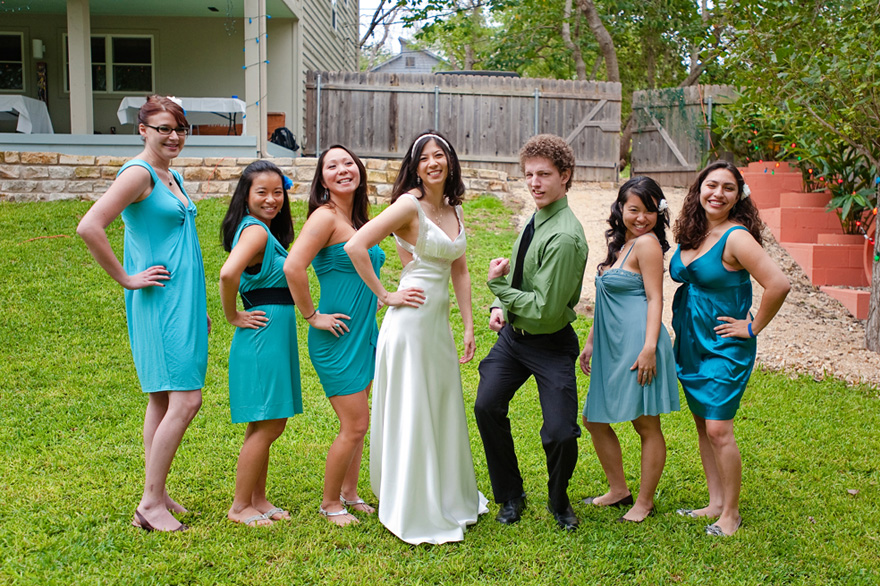 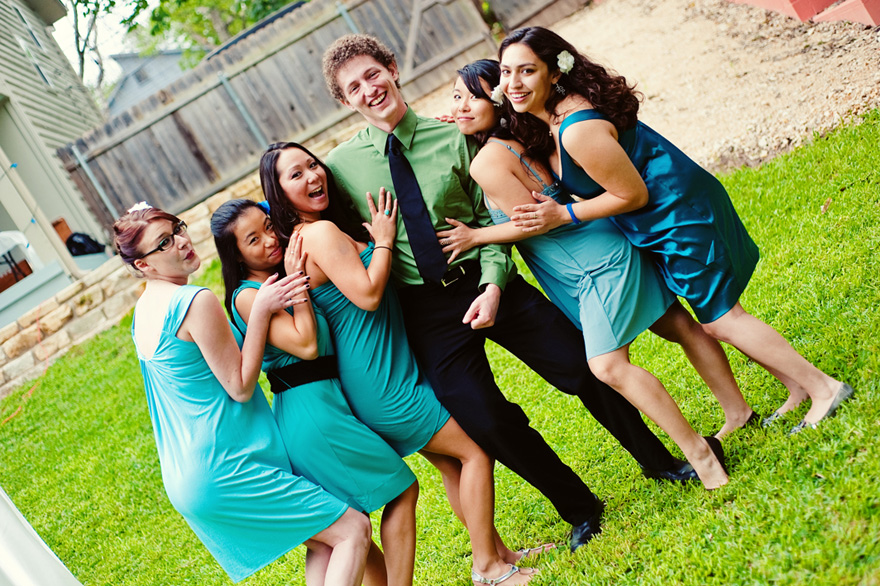 After we got ready, I went off to find Walt. We had decided we’d do the first-look photos and subsequent wedding party pictures before the ceremony, to save time and to use the available light (sure to go quickly after the 5pm ceremony). To be honest, I felt pretty silly walking around dressed up like a bride, nervously peeping around the fence where Walt was waiting, having my photo taken… here’s this guy I had been living with for the past year, the man who has already agreed that it would be best if I were in his life forever, and I was worried that he would think I wasn’t dolled up enough for the wedding. But as soon as I saw him, and he calmly looked at me and smiled, I was glad that we saw each other before the ceremony. I think I would’ve been a nervous wreck if we hadn’t had those few moments. (And then we took pretty pretty photos!) 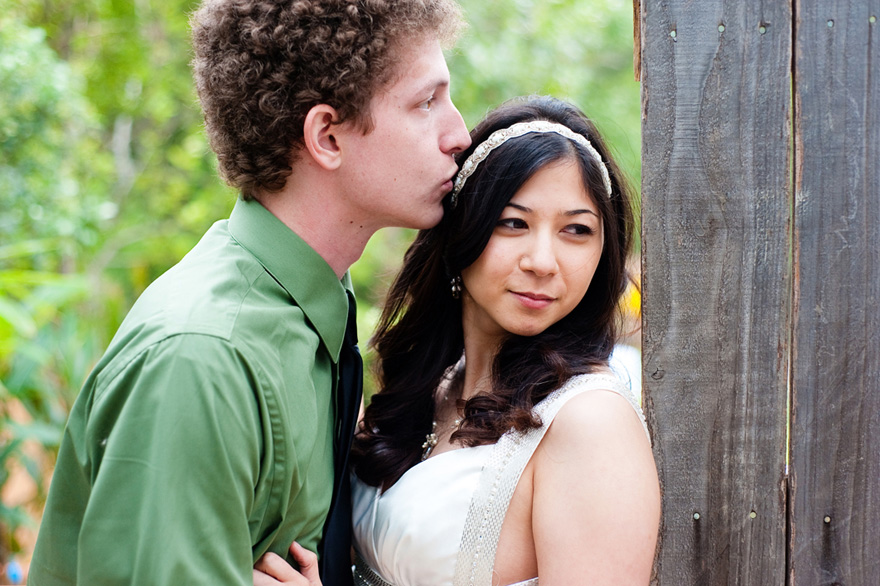 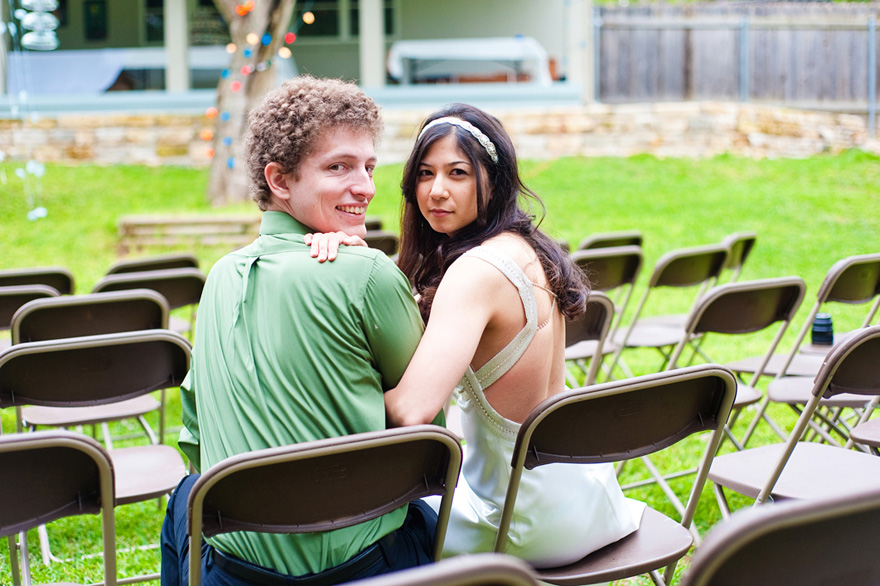 I hid from the arriving guests’ view after that. My friends and I had a quiet, contemplative moment in a darkened room where I lay down on a bed, my curled hair spread out over a pillow carefully so as not to get smushed, as I thought silently about the last few moments of my singledom. It wasn’t scary, the whole undertaking of getting married. Mostly I was thinking about how I had decided to change my name at the very last minute of indecision, and how strange it was going to be to take his name. (A year later and I’m still getting used to this.)

And then — the ceremony. I remember every step down the hill to the wedding tree. I was so elated to be there, and I felt so fabulous and so nervous, that I flung my arm up as I came down from the side of the house, as if to say HELLO to every guest who was there and standing up while I made my way to the altar. And then, when I got there, I did a sweeping bow, like a giant nerd. Abe, our friend and officiant, was nervous but did a fantastic job. 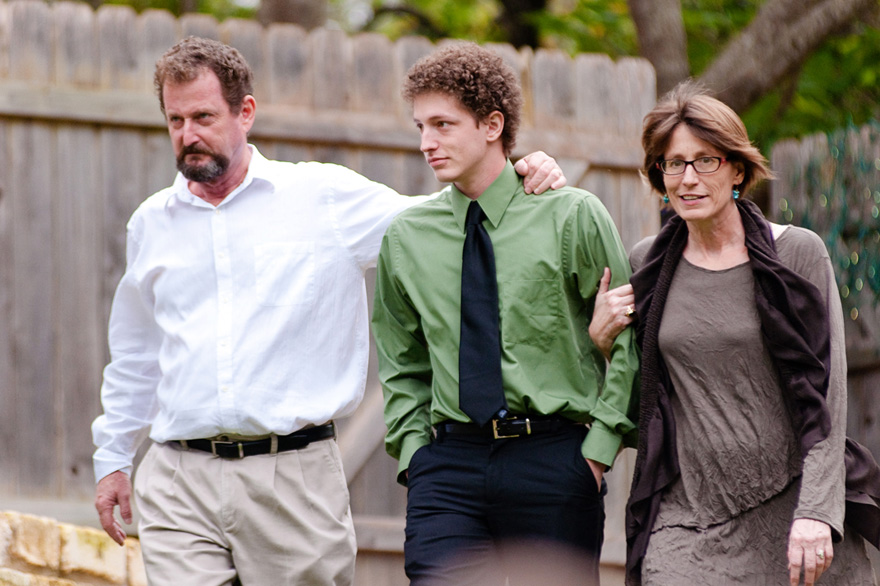 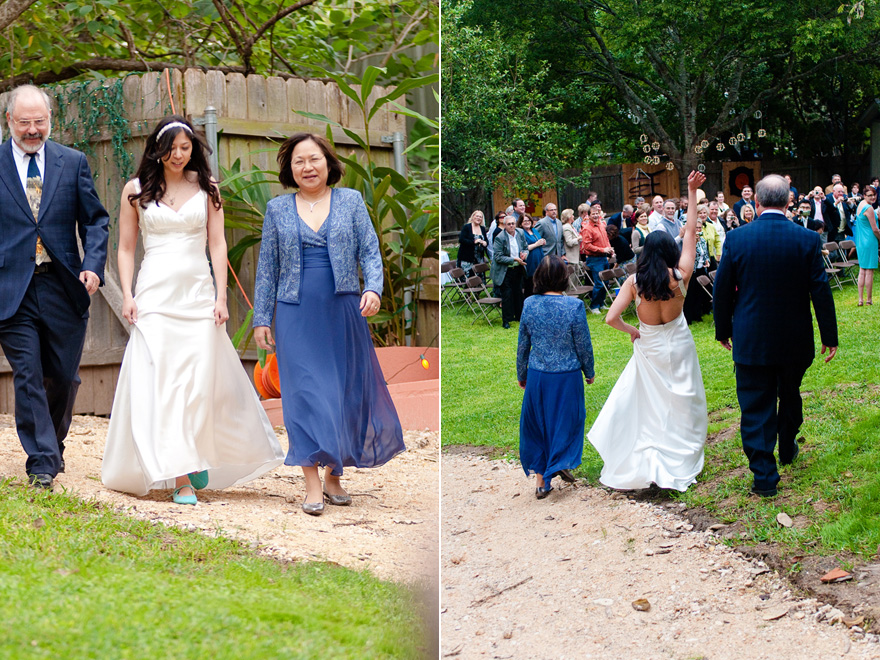 During the opening speech, I looked around at every single person in the audience, trying to remember the moment. Our friends Eric and Ann both did readings (he, an excerpt from the Lord of the Rings by Tolkien; she, “i carry your heart with me” by e.e. cummings) and soon we were at the point where we exchanged vows. I thought I should go first because I knew I’d be reduced to a blubbering mess, but Walt got weepy during my vows to him, and when it was his turn he couldn’t hold it together very well. Of course, his vows included references to farts, so I laughed… 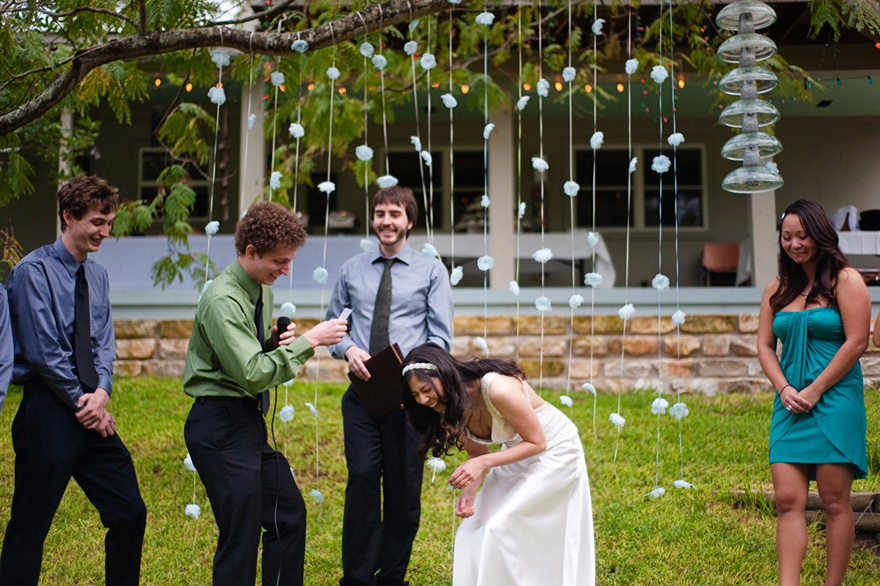 And then it turned serious and loving, so we both cried… 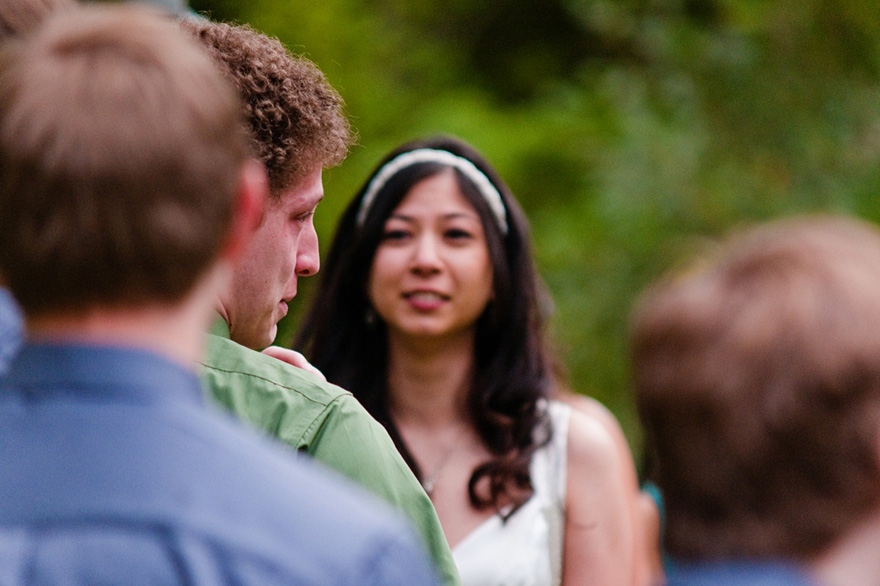 After we Rickrolled everyone, we recessed and stole a few quick “yay just married” kisses alone while I changed into my reception dress, a Betsey Johnson I’d found for a steal online — tea-length so I wouldn’t trip and fall on the lawn, as I am apt to do.

The reception was not a blur, but it did entail of a lot of the same things. I tried to be sure to talk to every single person who was there. I walked from table to table and chatted with everyone. The toasting competition entailed most of the reception, and my father’s toast made everyone weep. As we finished, we toasted our friends and family for coming. I don’t remember everything, but I do remember saying: When I was younger, Dad would kiss Mom in front of us. Mom would make excuses that she didn’t like it, and would say that he had something like peanut butter in his mustache. We’d say how gross it was that they were kissing in front of us. But Dad would turn to us and say, “Girls, I hope you find somebody who loves you as much as I love your mother.” … And I think I’ve found that guy. I think he really loves me. It ended with Walt drunkenly toasting his own father for the beautiful job he did on the backyard.

Walt’s mother sprinkled our heads with birdseed as we left for our hotel, “for good luck.”

For more photos, see a Flickr slideshow I uploaded of our 80 favorite shots here.

[…] Meg’s blog ever since I got engaged (waaaay back in February of 2009!) and even though I got married that October I continued to read it for the truly remarkable insight that all of the readers and […]

[…] husband Walt and I hit our one-year anniversary earlier this week. In celebration, we went on a small 2-day trip out of town to Fredericksburg, a […]

Your wedding inspired me to think small if/when we ever do take the plunge. I don’t know if I ever told you that. I will probably also steal the idea of the toasting competition, because we are not dancers and I’ve been trying to figure out a way around that. Your story is beautiful, and so are the pictures. Happy (belated) Anniversary!

The toasting competition was fantastic… I worried a little (after the fact) that maybe it ran kinda long or was pretty boring to some folks, but since everyone knew either Walt or me and BOTH of us were mocked (lovingly…) I think most folks were entertained :) Steal away! Thank you! :)