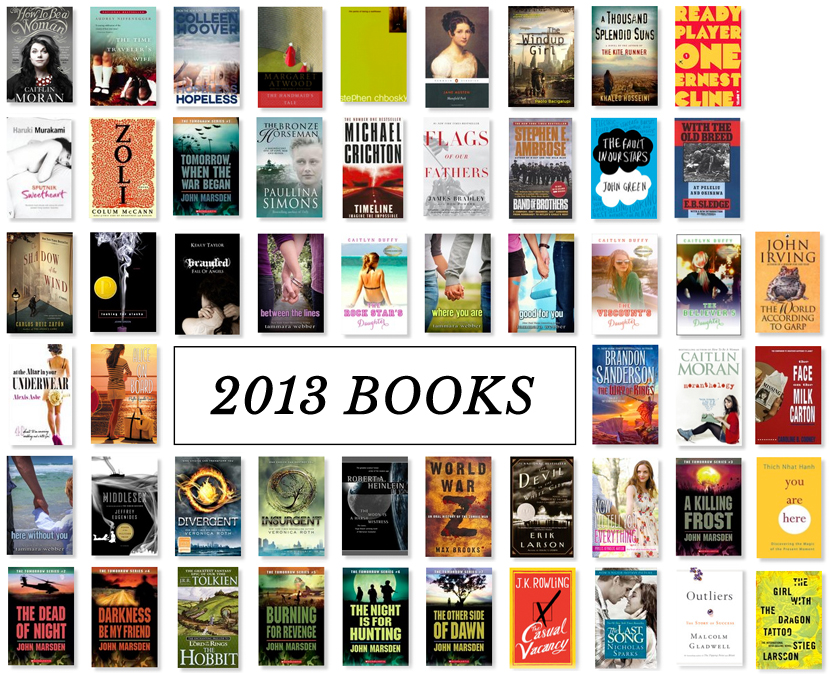 So another year has gone and I actually fulfilled one of my yearly goals: I read 50 books in 2013! I actually read 54, though a few were re-reads (I counted them anyway because it still takes time, energy, and thought to read a book anyhow!).

I’m not going to write a review for each one here — if you’re interested in more of my titles, or to follow my bookishness in general, add me on Goodreads! — but I’ll give prizes to some of my favorite and least-favorite recommendations.

Best read of the year:

Probably The Devil in the White City by Erik Larson. It’s got murder, art, history, and a historian who can actually write. Larson describes a (nonfiction! story) of a serial killer who preyed on women in Chicago at the same time the World’s Fair was being built. I could not put it down.

I saw the synopsis for Tammara Webber’s Between the Lines and said, “Eh, why not?” This YA novel introduces a teen starlet, Emma, who wins the breakout role of a lifetime: Lizbeth Bennet in the new teen movie adaptation of Pride and Prejudice, School Pride. The book follows Emma and her costar Reid as they court on and off the screen, with complications that arise from competitive co-stars and being famous. I was surprised at how much I enjoyed this book, so much that I bought and read the other 3 books in the series — but I really think this one could stand alone without the other stories. I’m weirdly into celebrity gossip and Pride and Prejudice remakes so this book was right up my alley.

As a total aside: I really want Hollywood to actually make this book into a movie, because it feels a little bit like that old 2000 WB series, “Grosse Pointe,” and I watch pretty much every Jane Austen-esque movie that comes out (minus Austenland).

Some books are just meant to be read slowly; books that you read because you enjoy reading. That honor goes to The Shadow of the Wind by Carlos Ruiz Zafón, which took me almost a month to get through, even though it’s not that large of a book (only about 500 pages). A boy living in post-WWII Barcelona finds a book by a mysterious author and then learns that someone is destroying all of the author’s works. It’s a good hook, and the story is complex and wonderful, but what really got me was the beautiful writing.

The Divergent series sounded so promising: everyone was talking about it, Hollywood was making a movie out of it, the premise was intriguing (I shamelessly admit I am on the dystopian train). The first book was fast-paced and exciting, and the romance subplot interesting but not the full focus of the story (which often happens in YA novels, so I was glad). When I got to the Insurgent, however, my excitement waned. The writing became stilted; people started talking like robots and whole swathes of dialogue felt wooden and flat. I could poke holes in the plot as I continued reading, and by the end I just didn’t care anymore. Veronica Roth, you are not getting any more pennies out of me.

The “Okay, Walt, you were right” book:

Walt always suggests books to me that he loves, and usually he gets it right: his recommendation for me to start A Song of Ice and Fire series was his idea, and I did enjoy the first four. I pick on him a lot because he always reads fantasy or history novels, so all of his recommendations are fantasy picks. But he got it right with Brandon Sanderson’s The Way of Kings, which was such an imaginative story that I chewed through the 1000-paged tome in 3 weeks. It’s an “ensemble” book, where there’s a cast of characters loosely connected to one another but exist in different lands with different stories and problems. I’m not a huge “fantasy” person and really liked this, so I’d recommend it to anyone who wants to try a good beginner fantasy novel — the names aren’t too crazy, the characters all have strong and distinctive personalities, and the world that Sanderson dreamed up feels very real and believable (even with sorcery and monster-creatures).

And here are some other books I enjoyed this year, but can’t think of witty titles to give…

• Tomorrow, When the War Began (7-book series by John Marsden) is a ’90s YA series about a group of teenagers who return home from a weeklong camping trip in the Australian wilderness to find that their country has been taken over by a foreign nation. The teens become guerilla fighters and each book deals with their scrapes with the enemy. The plot was good but the Aussie slang made it better.

• Outliers by Malcolm Gladwell: a pretty fascinating read about why successful people are successful. Hint: it has to do with a lot of practice, and basically being in the right place at the right time.

• Moranthology by Caitlin Moran: I laughed until my sides hurt, especially the “Sherlock” chapter.

Have you read any of these titles and do you agree with my recommendation? What are some of your favorite books from this year?

I love the Game of Thrones series! I’ve only gotten through the first 3 through — 4’s been keeping me away due to the character shifts. If you’ve ever read Ender’s Game (or liked the movie) you should try Ender’s Shadow. It’s a retelling of Ender’s Game from Bean’s perspective. I’m pretty sure I read Face on the Milk Carton in Jr High — is it worth a re-read?

Yes, the fourth one was less interesting than the first 3… which is why I haven’t finished the fifth yet! I enjoyed the Ender’s series (especially Speaker for the Dead) but haven’t read any of the Shadow ones (yet!) I’ll add them to my queue :) And yes, Face on the Milk Carton was a fun re-read and a good way to burn a few hours if you’re feeling nostalgic!

Cool I will check it out! My fiance has almost every Orson Scott Card book, we bonded over Ender’s Game when we first met :) I haven’t read Speaker for the Dead yet but I might give it a go this year.

As awesome as Ender’s Game was to read for the first time, Speaker for the Dead had me awake all night so I could finish it in one sitting. So I’d definitely recommend it!

I am envious of your wall of books read in 2013. My resolution last year was to read a book a month and I couldn’t even manage that. I’m excited to read a ton this year. -Evie

I completely agree!
I enjoyed it a lot and I am hoping for more from her!

I read how to be a women a few months ago and I really loved it! What did you think about casual vacancy?

Toni – I enjoyed it, but it was very different from the HP series so definitely don’t go into it thinking that it’s going to be magical or that good things will happen. It’s a lot of sadness and desperation performed by people in a very non-magical world. But JK Rowling can weave a great yarn and the writing is excellent. I’d recommend it only if you think of it as a book written by a talented writer, not as a book by the Harry Potter author.

I am making it a goal to read more this year, what are your “must read” business (anything related) books? I have a lengthy list but I am always curious what others find best! Thanks Elissa!

Alyssa – to be honest, I don’t think I’ve read many business books :( The only one that really fit as “business” was Outliers. Maybe I should include business books in my 2014 to-read list!

I need to get back on the reading train…you are amazing!

I used to be such a big reader, but I haven’t made it a priority lately. Last year I only read something like 10 books, which is pretty dismal. This year I want to read 45, which I think is a realistic goal. I’m going to add some of these you listed here to my “to read” list. Oh, you’ll be happy to know the next book is going to be Pride & Prejudice, after I finish what I’m currently reading.