We Will Be World Travelers (Pt II)

Have you ever been to New York? I have, once.

I was sixteen and it was a pseudo-vacation with my family. I say “pseudo” because the real reason we went up north was to see my cousin get married in Maine. It was not to see the sights — we saw the Guggenheim but not the Met, we didn’t check out Central Park. We flew to NYC, gathered my great-aunt who lives on Long Island, and drove to Bar Harbor… where I threw up on a whale-watching boat (but did enjoy a lovely wedding overlooking a scenic cliff the next day). Then we drove back; eight miserable hours each way in a tiny sedan. It was June 2001 and hot in New York City and freezing in Maine and the line to see from the top of the Statue of Liberty was so long that we just admired her from afar. I didn’t understand why there were no public bathrooms, and the people walked too fast, and I remember feeling very distinctly like a small-town nobody. 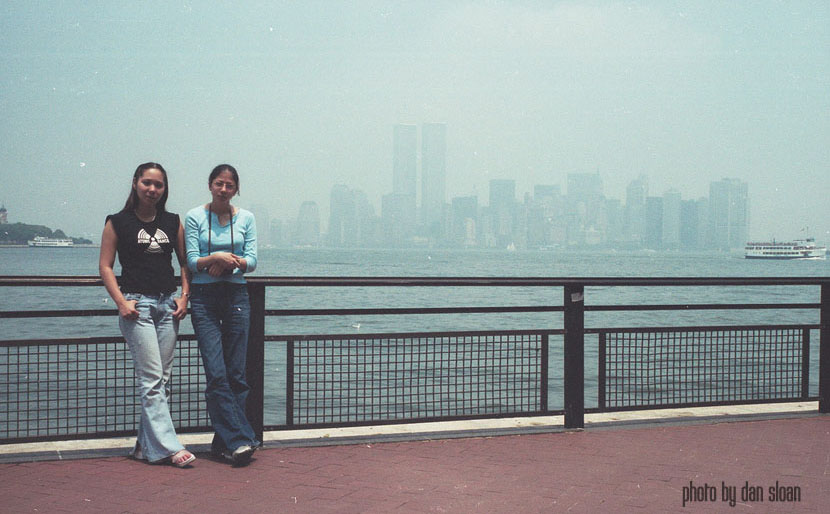 That’s me (on the right) with my sister. Notice how happy we are to be in New York.

New York did not give me a good first impression. In the years since then, I’ve been wary of it when it comes up in conversation. I don’t like to tell people that my experience in New York was unpleasant and that I really didn’t want to go back. But everyone is always so positive about it!

“You know what?” I told myself last month. “It’s been over ten years. I bet it’s different when you’re an adult. It’s probably amazing if you’re doing your own thing and not being dragged around by parents. It’ll be great! And you have so many friends there! Hang-outs! Slumber parties! Geeky photography nerd-outs!”

After a good while of hemming and hawing, I booked a spot at the What If Day Camp NY and bought plane tickets, so I’ll be visiting New York in a few weeks. I can’t say that I’m not apprehensive about it. The last time I was in New York, I found myself holding a cell phone in the middle of the sidewalk, with a finger plugged into one ear as I screamed to my friend in Houston, “Where is that store you were telling me about? I can’t find it” — as scores of people darted around this spectacle of an obvious teenaged clueless tourist making a spectacle of herself… and I’m pretty sure NYC hasn’t forgiven me for it. I mean, yeah, I was that person.

I cringe when I think about the last time I was in New York. It’s a quirky city, but I was young and naive and didn’t know what I was doing. I’m crossing my fingers that this next time it’ll be fun and different, and I’ll sense the spark that everyone else talks about.

Check out the Brooklyn Flea! Fun and good food/people-watching. http://www.brooklynflea.com/

I’ll be at What If day camp, too! Exciting!

Can’t wait to see you there next month :-)