Hey! Being a Wedding Guest is Awesome!

It’s been a while since I was a wedding guest, and it was fun being on the other side. A few months ago, I was a guest at my friends Eran and Lori’s wedding, and last Friday I was a guest at Sarah and Brody’s. And y’all, I am going to drop a truth bomb: did you know that guests have an awesome time?!

I was debating about whether or not to write this post, but I’m feeling inspired.

I used to think that weddings were just about the couple. It was their day, their celebration, their choices that made up the entity that was… THE wedding. And while that is still true — I realized after my own wedding that the point of a wedding is to celebrate with others. Every invited guest is special; every invited guest is important. Holding a wedding is about being a good host while you are sharing this momentous occasion with the people you hand-picked to celebrate it with you.

The guest’s role in this entire shindig is to enjoy. To be present, to share in the moment, and have fun.

At Lori and Eran’s wedding, instead of hauling a suitcase full of equipment, I wore a purse that had barely enough space to fit my car keys. And impractical shoes! The freedom of it!

Instead of taking thousands of photos and thinking the entire time about light, angles, and strategy, I snapped one shot on my phone. And if it’s a terrible shot, it doesn’t matter! (Though I do think Walter looks cute in this one…)

And instead of packing as much protein into my body as I can stomach before a wedding so that I can last until dinner, I enjoyed cocktail hour, snacked on two helpings of fruit and crackers, and ate a leisurely meal. You know that part in Talladega Nights where Will Ferrell says “What do I do with my hands?” That was me. There was so much time to just… sit back and enjoy everything that was happening. It was the first time in probably three years where I was a guest at a wedding, and I had to re-learn what it meant to be a guest. I was constantly fidgety, thinking that I was missing something. Gradually, I relaxed. 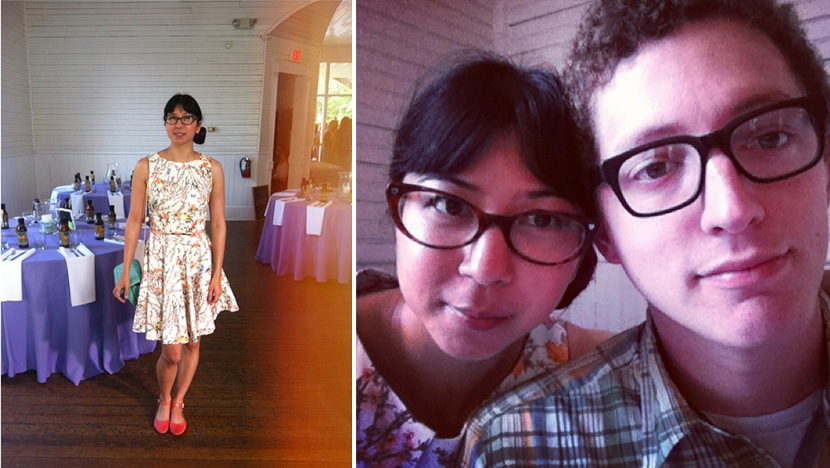 So when Sarah and Brody’s wedding came around last week, I was primed. I was ready.

I cried during their ceremony. I was 100% invested.

I signed their guestbook, took more than one edible wedding favor (chocolate), and was a part of the bubble send-off.

I took pictures in the photo booth with other guests.

I wore a light, fun-patterned dress.

I love taking photos at weddings — it’s one of my greatest pleasures — but if I’m going to be a guest, I want to just be a guest. I noticed things during the ceremony that I don’t usually notice when I’m shooting. When I’m shooting, I’m always thinking. But as a guest — I was actually listening. Feeling. Crying. Clapping. Participating, rather than just documenting. And I feel like it’s a waning thing, this whole “participation” idea, as more people find themselves documenting too.

I know how distracted I get when I’m taking photos. I know the difference now, between shooting a wedding and really being at a wedding. I just hope that more people put down their own cameras and feel the wedding too.

And so ends my warm, emotional babble about the beauty of enjoying weddings! Carry on…

Yes! I went to a wedding as an invited guest for the First. Time. Ever. earlier this year… and it was AMAAAAAZING. Dancing, drinking, meaningful hugging! Enjoying the sunset! Wearing something that wasn’t the least bit practical! Glorious.

Yes! I’ve been dying to go to a wedding – I haven’t been to one, apart from being the bride or the photographer, in over two years. Sometimes I really miss looking my best, rocking a pair of heels and makeup that’s not smudged. Being able to partake in a signature cocktail and not be “on” all night.