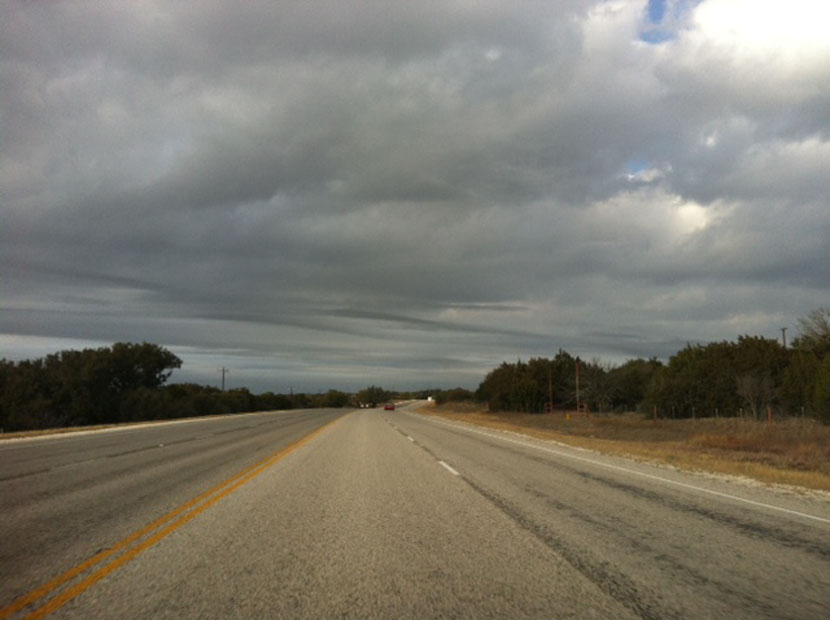 This past weekend, I drove to Abilene and back for a wedding. I spend so much of my time looking at screens — and when I’m not looking at screens, I’m evaluating three-dimensional objects and flattening them in my mind’s eye as I snap a shutter — that I was surprised to find that the world is so… round. Not round in the “globe” sense, but that people, trees, poles holding up road signs, buildings… are all three-dimensional and have shadows. I know it sounds crazy, but lately I’ve been finding myself more or less cooped up inside editing, so seeing the real world was different.

The day after the wedding, as I was ordering breakfast in the hotel lounge area, I overheard the guy sitting in the table next to mine telling his story to the server. His car had broken down and this stop in Abilene was unexpected.

Here’s a little truth about me. I like talking to random people, as long as we’re not going to be stuck next to each other for hours. I like talking to people in passing, before it can get awkward. I like striking up short little conversations with my grocery cashier, or a person helping me pick out eyeshadow at Sephora, but I wouldn’t like to talk to my seat-mate on a plane ride unless I knew I had a book I could use as an excuse to ignore them after sufficient time has passed. I think it comes from having been in food service, and remembering that it’s nice to be acknowledged as a real human being and not just an automaton who will hand things over to a customer.

So I turned to this guy, who must have been somewhere between 20 and 22, and asked, “So your car broke down? That’s a bummer.”

We had no partners to have conversations with; he’d finished his breakfast already and I was still waiting on mine. So we talked across the aisle to each other about what brought us to Abilene on that particular occasion. Tom (as he was named) was coming back from Honduras; his alternator broke on the way to Lubbock, where he was about to start his next semester of college. Me, I had just been at a lovely wedding, and I explained to him that, no, I don’t actually get hired by bridezillas (thank goodness).

My food arrived and he decided to grab his taxi to the repair garage. We said our goodbyes and I thought, there goes Tom, a person with an entire life that I know nothing about, and I will never see him again. And if I do see him again, I doubt I’ll remember who he is.

I ate my breakfast, grabbed my things, and started on my journey back to Austin. The car ride was long and I was all alone with my thoughts and three mixed CDs. And as I drove, sometimes on a two-lane highway with no other cars anywhere in sight, on that artery from one inhabited city to another, I thought, Wow. I am just one person. And the world is so big.

And then I hit replay a few times so I could sing along with Mandy Moore to “Candy.”

I knew that this would be a rambling little post. It’s just something that was bumping around in my head after the wedding. I wasn’t even sure if I wanted to share it, but hey, here I am.

Here’s something a little more familiar for you. This week’s nails: OPI’s “Kiss on the Chic” with Femme Couture’s “Hazelnut”… a little fun with tape:

In case you missed it this week:
5 Questions to Ask your Potential Wedding Photographer
Maggie & Daniel’s “Homegrown” Wedding at Mercury Hall

Something about being on the road, man. We drove back from New Mexico on New Year’s Day, heading east into the rising sun, with this whole unknown life about to unfold in front of me and yeah, it was a very existential moment. P.S. I’m happy you’re bringing back a little more of the personal posts. The people have spoken! :)

West Texas’ big skies always make me feel small. I used to have lots of existential thoughts swirling through my head as I drove to Midland to visit parents on my way home from college.

I like hearing your thoughts and think you’re a great writer. Thanks for sharing.

P.S. I’m glad you don’t get hired by bridezillas :)