This past month, I learned how to check Kindle books out from the library. It’s been revolutionary! I love learning little ways to save money, so checking out e-books for free is one of my new favorite things. There’s always a way to circumvent paying for the price of new books — going to Half-Price or just checking books out at your local library branch are great alternatives — but when you have a to-read queue, and there’s a specific title that you want, and there’s no library in town that has it, and you’re thisclose to buying a copy, sometimes checking to see if there’s an e-title available can help! I still do buy books — Amazon sometimes has older titles available used for 1¢ and you just pay for shipping! — but this has been great. :)

That being said, some links in here are affiliate links to Amazon, just so you’re aware.

I actually picked up A Thousand Splendid Suns

from Half-Price Books a few months ago, when I was perusing their $1 shelf. I’d read Khaled Hosseini’s previous novel, The Kite Runner,

a few years ago and thought it was amazing. This book didn’t disappoint. It takes place in Afghanistan over the period of about 30 years, from the perspectives of two different women (one older, one younger). Of course it’s a work of fiction, but the circumstances surrounding the women’s experiences, together and apart, are led by Afghanistan’s current events and its history. This book is beautiful, but it’s also heavy. When I finished it, all I could do was set it down and try to digest all of it. I’d recommend it.

On the flip side, Zoli: A Novel

by Colum McCann was a terrible disappointment. It’s sad because I read Let the Great World Spin,  also by McCann, in 2010 and loved loved loved it. It was the one book that I would recommend to people to read that year. So I had high expectations for Zoli, and while the subject was interesting, the storytelling itself was slow and boring, which was the opposite of Great World. The novel follows the life of Zoli, a Romani Gypsy poet. After the Communist party exploits her work for their own gain, she’s cast out of her tribe. What I found disappointing was that McCann did a lot of telling, instead of showing. The chunks of the novel that had dialogue were great; the long rambles of Zoli walking about were very dull. I’m still interested to read a few of McCann’s other works (maybe this was a fluke?), but I don’t think I’d tell people to read this novel any time soon.

And another book, written by an author I’m familiar with! Last year I read 1Q84, which was wonderful — Haruki Murakami has a way with gorgeous prose, weird ideas, and is very quirky-supernatural. Sputnik Sweetheart,

which was published about 8 years before 1Q84, seemed to take on a lot of the same qualities. It almost felt as though Sputnik was a blueprint for how he wanted to write 1Q84. There were similar elements: alternate dimensions/realities, characters obsessed with jazz music, the main female protagonists in both novels have very similar personalities, etc. I haven’t read enough Murakami to find out if this is normal — kind of like how Quentin Tarantino’s works all circulate around in the same universe, and lead back to each other — or if these two are just like sister books or something. So I guess it’s time to get my hands on The Wind-Up Bird Chronicle or Kafka on the Shore.

Finally, my one really random book choice: Ready Player One

by Ernest Cline. This is such a nostalgia kick! In the future, people are almost always jacked into a virtual world called OASIS, a kind of MMORPG/Internet hybrid. When the founder of OASIS dies, he leaves behind an intricate puzzle for all players to try to solve, and whoever solves it will inherit his massive fortune. Because the founder has an obsession with the 1980s, all of the pieces of the puzzle lead back to that decade, and so the book is just ’80s factoids and trivia and other throwbacks mixed in with intrigue, mystery, and violence. It was an easy read and one that I’d probably recommend to gamers and other ’80s kids. It might be too weird for people who are younger than 20, though.

There were some bad books in this batch, too. Books I couldn’t finish. And it pains me to say it, but Jane Austen was one of them.

Mansfield Park… what was this?! I usually adore Jane Austen — see my obsession with Pride and Prejudice, my appreciation of Sense and Sensibility, my Romola Garai fangirliness after she was in Emma — but Fanny Price was such a tedious character. She was so pious, timid, and unlikeable. Actually, all characters were unlikeable. At least with P&P you have Lizzy’s wit to counter Mrs. Bennet’s irritating tirades, or you could enjoy Mr. Knightley’s level-headedness when you thought Emma was being a brat, but no one in Mansfield Park has any redeeming qualities. It felt like reading a high school book assignment and I quit halfway through. (I did find out later, in looking at other people’s reviews, that Fanny stands up for what she believes in, etc., but a little too late, in my opinion. There was nothing holding me to that novel 50% of the way through, so why would I stick it out til she does something in the last quarter?)

The Wind-Up Girl by Paulo Bacigalupi: the idea behind this book was awesome. The back of the book even made it sound amazing: “What happens when calories become currency? What happens when bio-terrorism becomes a tool for corporate profits, when said bio-terrorism’s genetic drift forces mankind to the cusp of post-human evolution?” It won a Nebula Award and a Hugo. I was excited. I started to read. The writing was terrible! Here’s a photo I took of one page, the page that made me close the book and throw it into my “nope” pile. 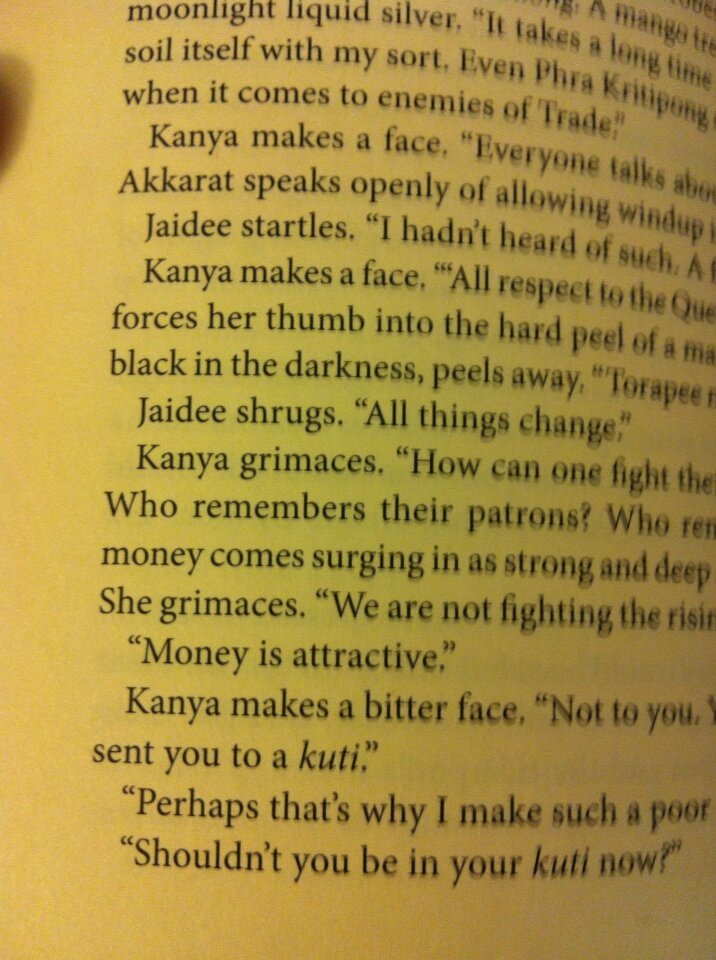 How many times does Kanya grimace or make a face on page 170? Maybe if you could get past the repetitive writing, you could learn to enjoy the story. There are a lot of people I know who did like this, including my mother-in-law, who normally has excellent taste :) However, I could not.

It’s been a few weeks since the last book post, so what are you reading now? Any new recommendations??

This book moved me to tears, it is truly a remarkable and beautifully crafted novel. At times Hosseini paints harrowing and brutal scenes but always retains, through the characters of Mariam and Laila, humanity, spirit and above all love. There were chapters in this novel through which I literally held my breath, wishing with all my heart that what was unfolding would not, could not happen. It is very easy for those of us lucky enough to live in safety to visualise Afghanistan as a brutal, forsaken place, but this novel shows us something more. It forces the reader to acknowledge and recognise not only the suffering of people in our war torn world but something else, the human capacity for survival, forgiveness and love. Truly a wonderful book and one I would urge others to read. The best novel I have read in a long time and one that will stay with me for a long time to come.

I got annoyed reading that one page too! haha. WAY too much repeat stuff going on! haha

Hosseini is coming out with a new book in May! I loved both the Kite Runner & A Thousand Splendid Suns, so I’m excited to read his 3rd book.

I tried to read Kafka on the Shore and quit after 100 pages. It was too weird for me– alternate dimensions, a cat assassin, multiple stories in one.

I’m still reading the same books! I did read this free one from iBooks called “Lexi Graves Mysteries” or something like that, a sort of romance-murder mystery. It was actually quite funny and a very light read, if you’re interested.

@Becca – Reaaally? hmmm. Have you read anything else by Murakami? I just picked up MORE books today (addicted!) and got 2 more WWII history novels (nonfiction) and a novel called The Shadow of the Wind by Carlos Ruiz Zafon. I hadn’t heard of it before today but it looked interesting! Hope it’s good.