On the Other Side of the Lens

Walt and I had our 3-year anniversary session earlier this week. While the best part about having our photo taken every year is undoubtedly the pretty shots of us that document yet another year of our lives together, it’s also really important to me for another reason: I remember what it’s like to be on the other side of the lens.

I’ve never really been a ham, and I remember wondering (back in the day) if our wedding was going to be really uncomfortable because all attention was going to be focused on us. Don’t get me wrong — I like attention sometimes, but intense, all-eyes-on-me attention gives me the sweats. I hated walking across the stage to pick up my diploma; I didn’t like having to go up to the board during math class; I’d much rather sit down at parties than dance. And I’m sure a lot of my clients are the same way. (Well, maybe not about the dancing. I seem to be alone in my inability to boogie.)

Being photographed isn’t just picking a photographer and showing up… it’s a lot of little things. Communication between both parties. Finalizing the decision. Putting thought into an outfit. Clearing the schedule. And plucking up the courage to actually face a camera instead of hiding behind it.

Back in April, we contacted the lovely Brittany Esther from Canada about our fall anniversary session. She graciously agreed to come down and photograph us. With the help of a few of my more fashion-forward friends, I spent three months perfecting an outfit that was me-but-better-than-usual-me (if that makes sense — a slightly more exaggerated me; a sassy, confident me — a little different from my normal me, who likes to sit around in pajama pants and tank tops!). I researched makeup looks and settled on wanting to still look like me, but a more glammed-up version — cat eyes and uncharacteristically red lips.

Of course, even if you have planning down to a science, you can’t count on Mother Nature to cooperate. The day of our session, it was cloudy, and as we were driving to the location to meet Brittany, the sky opened up and poured buckets. And this is where the 3 C’s come in. I just made up the 3 C’s but I think they are important for a photographer to convey to a client.

“It’s raining,” Walt said right before we left the house. “Are we going to shoot this in the rain?”

I knew Britt wouldn’t want to reschedule, and I’m glad that she didn’t. I was so hyped up to go shoot this — I’d been waiting for months, and I’d paid to have my makeup done professionally that day — that if she’d called me at the last minute to postpone, I would have been so deflated.

Sure, there are good reasons to reschedule. Really awful, dangerous-type weather, like hurricanes and tornadoes, would make me throw up my hands and say, “Okay, let’s just do this some other time. I don’t want to die from a piece of a roof tile flying through the air.” Understandable. But a bit of rain? Eh. We can do it.

The other thing is… I’d seen enough of Britt’s work to know that she wouldn’t be scared by rain. We arrived, got out of the car, and were ready to do whatever she and her boyfriend/assistant Sam asked. She stood in the downpour holding her (weather-sealed) camera and called out instructions. Her feet were soaked and water was traveling up her tights. She didn’t show the least bit of discomfort, was bright and cheery and knew what she wanted from us to get the vision in her head out into the world, and I knew our confidence was well-placed.

I’m actually writing this before even receiving a sneak peek of the photos… I haven’t seen one frame, not even from the back of the camera. So this is my supreme confidence that the session was gorgeous and Brittany did her magic and we’re going to be ecstatic about what we receive, the end.

After a little bit, Walt and I were soaked. Not a terrible thing, but when both of us wear glasses, it can be a pain to keep taking them off to wipe away beads of rain, over and over again. Britt ushered us into a little alcove of a building with a roof and as the rain got worse we shot in there for about 40 minutes. It didn’t bother me at all because I knew that she would get a variety of looks, poses, feelings, and environmental shots, even though we were limited to a little rectangular space about the size of a single-car garage. I mean, have you seen her work? She is phenomenal. Sam also shot with a tilt-shift (I’ve never been shot with a tilt-shift before!).

When the rain let up we moved to a few other little spots nearby, and the light was creamy, buttery, just gorgeous.

For a few sneak peeks of our session, go to Brittany’s Facebook page here.

And because a post isn’t complete without a photo, here’s a shot of us I took on my phone after the session — when we’re wet and my hair is frizzy from humidity and Walt has his hungry face on! No, but really, go to Britt’s Facebook page and look at those beautiful photos instead. 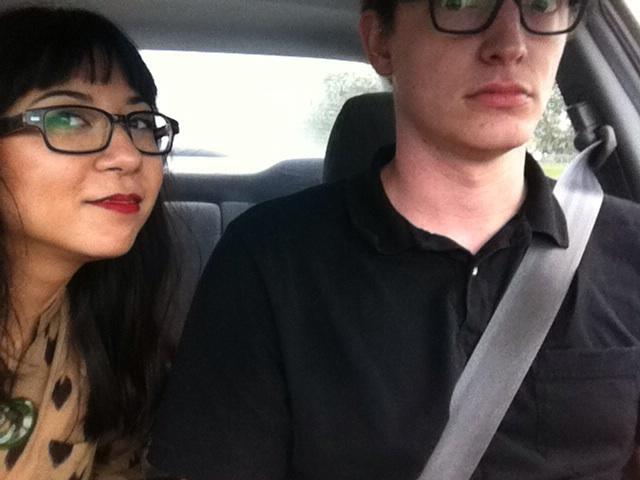 Okay – that’s it. It is ridiculous that I, a photographer, haven’t hired somebody whose work I love and respect to shoot James and I at least once every couple of years! I mean.. seriously. We have to do it! Alright. I’m going to plan it. It is happening. You’ve inspired me! :)

I can’t wait to see your photos!! You’ve got me super amped – John and I are having our 2 year anniversary portraits this weekend.