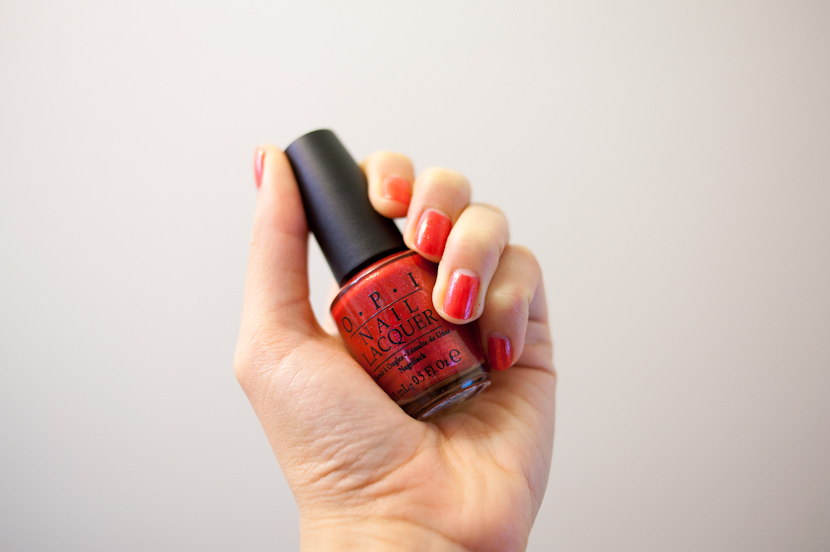 This week’s nails are another OPI color… “Animalistic” from the Muppet collection. I bought this color for 50% off because it was a discontinued color, and it was a great pick… I love it! A red that actually works for me because it’s kinda pink too.

I hope everyone had a wonderful Memorial Day holiday! I spent this week in nostalgia. See, confession: I have a soft spot for teen soaps from the late ’90s. I call it the WB’s Millennium era, because the WB channel showed all sorts of teenage programming that I related to (or wanted to relate to) when I was in middle school in 1997. Buffy, Roswell, Grosse Pointe, Popular… they were all so amazing and I still rewatch Roswell once in a while because that show’s pilot is, in my opinion, absolutely flawless.

So I’ve been watching a lot of ’90s teen drama this past week. Some Roswell, the entirety of the satirical Grosse Pointe (which a lot of people don’t know about — it ran for only a season, but it was a harsh and hilarious behind-the-scenes show-within-a-show that parodied 90210 and totally worth the DVD boxset), the first few episodes of Dawson’s Creek… it’s been fun. And a little sad, knowing that these shows have been off the air for a decade. I feel a little old :)

Did you watch any of these shows? Walt makes fun of me for my poor taste. We like what we like…

A few links around the web –
It’s Maru’s birthday! I love this chubby cat. (hat tip: Kandise)
Pride and Prejudice on a letterpress – ahhhh I want one of these when they’re finished…. (hat tip: Jane)
Ming & Ping: The Darkness of Night – one of my favorite bands just released a new CD… it’s so good! Only $6 on iTunes… check it out!

And the squee was heard for miles. I absolutely adore Maru and yay for Maru birthdays!!!!! EEEEEE!!!!!

As for the WB dramas… I’m sure you know my Buffy and Angel addiction, but I also partook in the Roswell, Dawson’s Creek, and Felicity (which I just recently rewatched much to Steven’s chagrin). I did not see Grosse Pointe, which I will now have to find and devour…

Also, Andy and I were just literally a few weeks ago lamenting about how old we are b/c dear God Buffy started not last decade but the decade before that and are we really that old? 15 years? OMG!!!

To be completely honest, I didn’t watch Buffy when it first aired. I only got into it a few years ago. (I am a late convert.) I didn’t watch all of Dawson’s Creek when it first aired, so seeing a few episodes now is kind of a new experience for me. Buuuut Roswell: perfection. Grosse Pointe and Popular: I can’t believe they cancelled those shows so early. They were so good and ENDED ON CLIFFHANGERS which fills me with curiosity! Some middle school friends and I had a conversation on Facebook yesterday about how hilarious it is that Dawson’s Creek was considered risque because they talked about sex. Meanwhile, in this decade, actors portraying 16-year-olds are getting it on every week…

Mmm, I remember the WB, and the whole mess of shows they used to have. I can’t remember if that’s where Smallville started, but my sister followed that show for several seasons. I even remember Unhappily Ever After, and thinking that was funny back in the day. Seems like a looong time ago now. If you want to get me going, however, it’s all about classic Nickelodeon and PBS : D