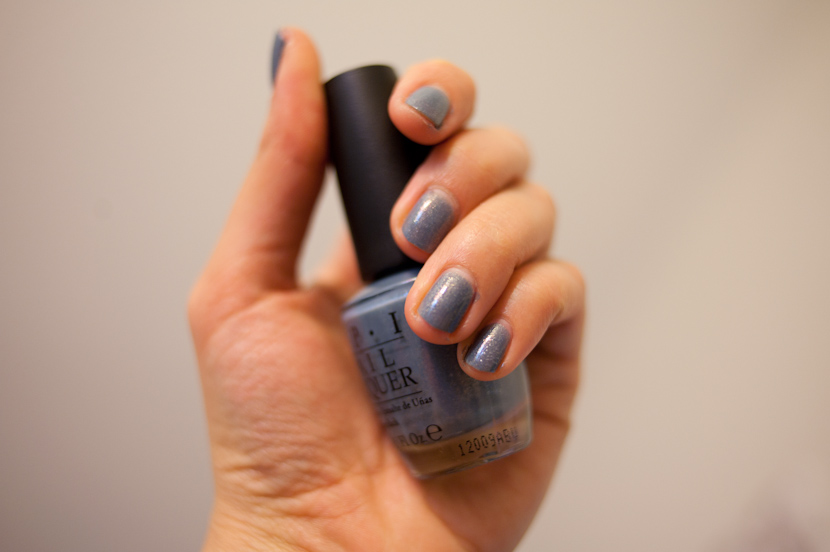 Nail Polish Friday – this week it’s I Have a Herring Problem by OPI, from the Holland collection. I’m kind of in love with this. It’s blue, kinda purply, kinda grey, with glitter. Yes.

So even though it hasn’t been announced on Facebook yet, my sister announced her engagement to our family last night via email (and then said I could tell other people, so I’m writing this on my blog — I’ll leave her big, “official” Facebook announcement to her). She sent a photo of her left hand with a trio of diamonds on her ring finger and the subject “EEEEK!” I’m sure she would’ve called to listen to me scream in excitement, had she and her fiancé not been in Italy and been slammed with roaming charges. Yup, my sister got engaged in Europe. Sighhhh, how dreamy.

Immediately after I calmed down, I started thinking about the monumental task she has ahead of her of deciding how she wants to get married. I suddenly understood what it was like to be one of those over-enthusiastic, well-meaning people who ask a million questions as soon as the engagement is announced. I wanted to sit her down and fire off questions like, “Do you want a big wedding? How big is your guest list going to be? Do you know what kind of dress you want? Do you need a photographer recommendation?” (because, as I told my parents, it’s my only sister’s wedding. You can guess where I’m going to be. I won’t pick up a single camera; I’ll be enjoying myself all day. And I’ll be eating a ton of cake, if she chooses to have cake. Which… I really hope she does. Cake is so good. Well, pie is good too.)

And then I realized I need to step back, and listen to my own advice that I give people. Enjoy it! Enjoy being engaged. Take your time figuring stuff out. Don’t let family members (ahem) push you around.

So this is me, chilling out, waiting for the full story… and hopefully, if she needs advice, I’ll have something for her :)

Blog posts you may have missed this week –
Jessica & Toni | Three – from the beautiful wedding on Saturday, three preview shots
On Growing Up – just me babbling on, I suppose.

This Sunday is a partial solar eclipse! It should be visible in Austin from around 7:35 to 8:20 pm. I am going to try to get a photo of it. We shall see…

Is it sad I searched for this “Hello, Friday” blog to see if you could keep your mouth shut? :) Just kidding! So happy that you are excited and I for sure will listen to your advice enjoy my engagement, and then when the time comes, scream to my baby sister for help. In the mean time, I am just elated to be on the same page as the beautiful ceremony of Jessica and Toni above. Great work, sis!