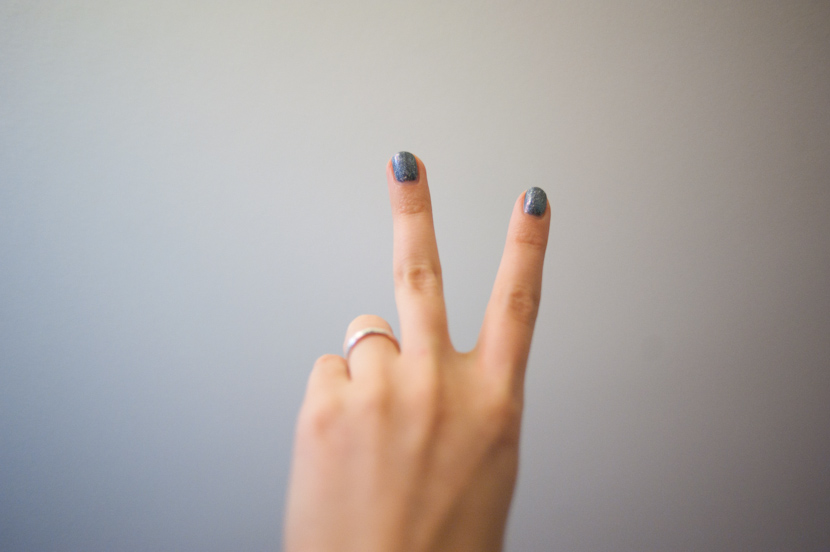 It’s been quite an uneventful week. So this week’s Hello, Friday has only one photo… this is Zoya’s Marina (a dark, metallic blue) with Milani’s Cyberspace over it. The effect is pretty nice :)

Posts on the blog you may have missed this week-
And Now for Something Completely Different (a rare Tuesday personal post, about my first dermatologist appointment)
Hershey’s Air Delight vs. Nestle Aero (eating chocolate FOR SCIENCE!)
The Great Twitter Experiment (I banned myself from using Twitter for a month. And the results were…)

Elsewhere –
Oh, I’m so sorry for doing this, but I’m going to be posting a lot of hilarious, inane stuff. No deep introspection here. (Except the Nazi stuff at the end.)
I seriously think there is a Tumblr for everything. This one mashes up Jurassic Park and Parks & Rec. (hat tip: Kate)
T-Rex Trying. He has such stubby little arms! Awh.
Pajiba continues to whet my appetite for the Hunger Games movie. Come out already! (Warning: language) New Images from the Hunger Games…
And back to being serious now… some really intriguing photos from Nazi Germany by Hugo Jaeger, Hitler’s formal personal photographer, on Flickr. I think WWII is a really interesting time in our world’s history, and I studied it intensively in college. This is a little glimpse into a world I can’t even imagine inhabiting. What’s fascinating to me is that I’ve been to Germany and I recognize some of those landmarks.

I also want to take the time to talk about my “bread experiment.” On a random whim a little more than a week ago, I thought it’d be interesting to stop eating bread and other wheat-germ products (so: cereal, crackers, granola bars, and the like) and see what would happen. It’s actually been a very easy switch; I just replaced one glutinous thing with a gluten-free option and went on with my life. For instance, in the past I would eat granola bars because I want something sweet; and now instead, I eat a clementine. I am a big fan of peanut butter sandwiches on wheat bread with honey; I realized that my peanut-butter-sandwich habit was just for the peanut butter, so now I just have a spoonful of it by itself or with some dark chocolate chips. I also replaced dinner bread/crackers with a sweet potato. And life goes on as usual.

Well, not as usual. It’s crazy. I have so much more energy. I’m a notorious back- and neck-popper, but I’ve cut down since my joints don’t feel as stiff. I’m sleeping lighter, but also feeling more refreshed in the morning, and I’m even waking up before my alarm.

I’m not going full gluten-free — there are trace amounts of gluten in things I eat occasionally, like soy sauce or (oddly enough) in the tuna brand I prefer. And I will not say no to the occasional cookie. But cutting it out has been really rewarding so far, and I’m going to continue to see what else happens.

Has anyone else gone gluten-free/almost-gluten-free? What have your results been?

As someone who has celiac and has been entirely gluten free for 10 years, I wanted to bang my head on walls when I heard of people going ‘gluten free’ as a diet for weight loss. Being entirely gluten free is damn hard/not good for your body and is a recipe for actually gaining weight.
But it seems you’re doing this randomly and not for weight loss- in that case, it can make you feel less ‘blah’. Especially if you’re not really gluten free but just sorta gluten-free which you talked about (being really gluten free has some issues with nutrition). Basically if you’re eating less bread/pasta/processed foods of course you’re going to feel better!! So if being sorta gluten free makes you eat fruit, yay! Do it. And hit me up if you need some recipes :D Or a list of the crappiest tasting snack bars on the planet, ha!

Do you have a problem with gluten, as in it was making you sick or not feel well…? Or was it just to see how you felt without it kind of experiment? I’ve never thought about not having it just for the heck of it. I always thought I’d only do that if I had a reaction to it…. but I’m hearing of more and more people going gluten free – so it’s intriguing me!

Christy – I have a sensitive stomach and I was already limiting my bread intake because more bread would always lead to a more upset digestive system, so I wondered what it would do if I decided to forgo sandwiches. I also had/have a bad habit of snacking on cereal instead of eating something more substantial, and I’d still be hungry. So I cut it out to see what would happen, and my energy has just jumped since starting it.

I like to do random tests with what I eat because I had terrible stomachaches when I was younger, and once I started keeping a food log I saw correlations between what I ate and when my aches would occur. This is also how I figured out that dairy and I don’t get along. I’d been feeling fatigued for a while and noticed that the more tired I got, the more I just wanted to eat peanut-butter sandwiches. Once I realized that less sandwiches meant more energy, I wondered about the other processed foods I eat…

Let it be known that I already don’t eat a lot of processed stuff in general… I am in favor of lots of veggies and fruits and roots; caffeine-free since ’03 and I drink only water or decaf green/chamomile tea; all that fun stuff. It’s just that I have a weakness for chocolate-infused snacks like chocolate-chip pancakes, chocolate-chip granola bars… & FYI, my grandmother is a celiac, and Asians are apparently more gluten-intolerant than other races (my mother was advised to go on a gluten-free diet though she’s not a “genuine” celiac) so I thought, why not test this theory out?

Kelly – This is definitely not a weight loss thing, and although I’m not a nutritionist, I don’t see how being entire gluten-free is not good for your body and is a recipe for gaining weight? I can understand replacing glutinous foods with gluten-free substitutes as a good way of gaining weight (my sister was misdiagnosed as a celiac for 7 years, so I’m aware of the caloric density of a lot of those GF options like rice bread, GF cinnamon rolls, GF cookies, etc.), but if you’re replacing starchy processed foods with anything whole (ie, out of the ground, like fruit or potatoes) I would assume that that could help you lose weight(?). Though that is not my objective anyway… Anddddd since you’ve been practicing a GF diet for 10 years I defer to your experience (you obviously know more than I do!)

I’ve been thinking about going gluten free for a little while too, just to see how I felt. I eat waaaaaay too much bread and pasta. That’s so interesting that you’ve already seen a change – how long have you been cutting out gluten?

Oh! I can’t believe I didn’t write it in the post. I thought I had… [Edit: I updated the post to include this info!] I only started last week. By the third day I was feeling the positive effects! I didn’t realize how much bread was weighing me down until then. I didn’t think I was even eating that much of it, but apparently a granola bar here, a few crackers there, a cup of dry cereal as a snack, all adds up.