Branding: What is this Symbol?

A little over a month ago, I changed up my site. You may have noticed a kind of weird-looking shape off to the side, there, and wondered what it was. What did it symbolize? Where did it come from? 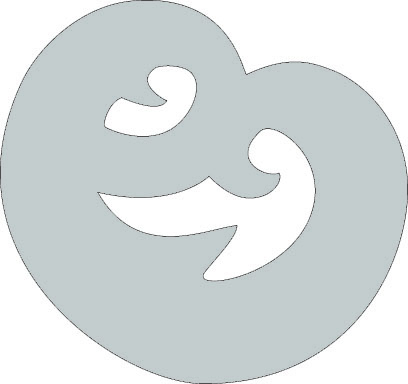 This is the story about the symbol.

Now, in order for the story to make any sense, we’ll have to fill in the context. When I first saw this symbol, I was 22 and had just completed one of the more grueling years of my college academic life. In the spring of 2006, I did an intensive history course at UT called the Normandy Scholars program, in which 25 students took the same classes together (covering different perspectives of WWII, including a Russian history course, American history up to 1945, French civilization and language, and Nazism and German culture), then we all traveled to different historical spots in Europe together for three weeks. My small world was suddenly pushed open in those 20-odd weeks of massive book consumption, culture overload, French-cramming, movie-watching, and high-intesity paper-writing. During the semester I also contracted mononucleosis, which was going around the dorms at the time, and so I spent the time I was awake either reading about wartime atrocities until I cried, taking small naps in between writing mountains of papers, and nursing my enlarged lymph nodes that I had named after the Three Stooges.

Needless to say, it was a rough semester, and by the time the fall semester started, I knew more about who I was, who I wanted to be, and felt a lot more… worldly. Not that I didn’t feel somewhat worldly before the program — but it did open my eyes to multiple perspectives of politics and war, the cruelty of the human race, and also made me feel more connected to my own ancestral roots. I was beginning to think about my life as an adult, and was laying down the framework for what I wanted to do with my life: my honors thesis, finally declaring my major, and realizing that I was actually excited about what sorts of things I could achieve after handling such an inconceivably hard semester.

As a one last hurrah, my parents took my sister and me to Hawaii for our final Mom-and-Dad-funded vacation at the end of 2006. We saw the Arizona Memorial on day 3 of our trip, and on day 4 we went to the Polynesian Cultural Center. While wandering around there, I saw a necklace. It was nothing like my usual style — the pendant was large, at least an inch-and-a-half wide, strung up on a simple black string, and to someone who rarely wears jewelry that is obscenely huge — but it felt like me. I learned that the artisan who created the piece had lived among the Maori tribe in New Zealand and carved the shape out of greenstone, a hard rock that the Maori people use to carve their canoes. The shape symbolized koru (fern), which stood for new life, growth, strength, and peace. It’s an integral part of Maori art: The circular shape of the koru helps to convey the idea of perpetual movement while the inner coil suggests a return to the point of origin.

My sister, who knows my style, told me to wait and think about it. The necklace was expensive, especially on a student budget. We continued our trek around the Cultural Center, moving on to Fiji, then Tahiti, and finally we made it to the end of the line where there was a fire show. By that time, I had made up my mind. It would be my gift to myself, and I would buy it and wear it all the time. I turned around to go back, and found the park closed. Of course.

We drove back to our hotel an hour away and I schemed of ways to go back to the center before our trip was over. The next day, I convinced my parents we needed to drive all the way back so I could pick up the necklace. I walked right back into the park, found the necklace, paid for it, and walked right back out. I wear it all the time. It’s been with me through my entire relationship with Walt, my college graduation, several cycles of pink hair, and quite a few self-portraits. I squeeze it in my palm when I’m thinking and I feel the smooth corners fit my hand exactly.

Clockwise, from top left: matching my pink hair to cupcake frosting; the day I bought the necklace in 2006 in the car on the ride home; graduation day at UT in 2008; a self-portrait in 2007.

When I started my photography business, I didn’t really think about logos — just the photography, really. It wasn’t until I realized I wanted a more cohesive web presence did I really think about the value of a logo or a symbol that was about me. I hired someone to help me find this symbol, but I was having a hard time figuring out who I was, and soul-searching while exhausted is a fruitless endeavor. I shelved the branding project and continued to shoot.

By the time it hit me that this symbol, which has been through so much with me already and always feels so “me,” was actually perfect, I was apprehensive about using it. I am not Maori, and I’ve always been annoyed with people who know nothing about a culture misappropriating symbols for their own use (non-Japanese-speaking folks getting kanji tattoos rank very high on my list of irritations). But I think I’ve lived with this symbol for so long that it truly is a part of who I am, how I think, and how I approach life.

So I tentatively used the outline of the shape for a logo and everyone I know responded to it well. And now I accept that this is the “logo” I was looking for. It was staring at me in the face this entire time.

Very cool. I liked the symbol, but never knew what it was and didn’t think to ask. I like the story now that I know. And of course, I love the pink hair!

Very nice! Great to know more about the story behind it…glad you shared :)

I love it — it’s so beautiful and personal.

I was wondering about this! Cool!

What an awesome story! I was wondering about the history behind it. I love your logo.

I was so glad when I saw you were using your necklace as your logo and now I’m even more excited knowing what it means to you. :-)

Oh my god Elissa. That self portrait is amazing.