This is a post that has been bumping around in the back of my head.

The landscape of communication has changed a lot in the past twenty years. I know that for myself, I went from handwriting in journals in the ’90s, to eventually splitting the majority of my thoughts between a public blog, Twitter, and Facebook account. I know this is an issue that we of the “older” internet generation — you know, over-25-year-olds — see with the tweens who now have open access to the types of social media we didn’t even dream of when we were twelve. Texting replacing talking. Facebook instead of slam books. Twitter instead of little cliques on the playground. There is no filter sometimes. We perceive our thoughts as so small that it warrants our friends’ attention, but if anyone else overhears, it’s just eavesdropping and no harm done.

We all use social media to let off steam… updating our statuses to vent about a day that’s going wrong, or lamenting something that we feel we don’t have the power to change. I’m right there with you. Last week had been a grumpy week for Elissa. This Monday was a very displeasing Monday. So even though I didn’t want to be a grumpy gus, I still got a little snarky, but I’m turning it around. Try to breathe. Remember, Elissa, you could be staring at the inside of a cubicle at that state agency you just escaped from. Some disappointing news delivered to your inbox is really not a horrible thing. Smile, eat a big bite of chocolate, exercise, hug the cats. (Maybe not in that order.)

I wasn’t always this way and it’s been a long and difficult road to try to change direction, mentally. I know part of it was environmental — life is just so much better outside of that fluorescent-lit drag of an office. For the first year of my business (which, interestingly, coincided with my second year at the state agency) I was angry. Angry! I was working out, eating right, married to an amazing man… but despite all the good, I was only seeing the bad. Business was not off to a great start; people were hiring me to be a button-pusher (not as an artist) because my prices were so low, and I was constantly being undercut; I didn’t get along with my co-workers; I felt like I was stuck in a rut. I’d come home and sulk. My Facebook was full of sneering status updates or stuff with defeatist undertones. I used online communities to vent my frustration.

Until one day, someone I looked up to, almost like an older sister or maybe a business mentor, said, “You shouldn’t want to be perceived as a complaint stream.” (Along with some other choice words that zapped me right in the gut.) I’d been given tough love before, but never from someone who wasn’t related to me or in a giant position of influence over me (such as a professor).

It was like I took a step back from myself and saw me as others saw me: a moderately talented photographer who just wouldn’t shut up about the small, insignificant problems in her life. I started working on turning it all around. It wasn’t easy; life, when you’re waking up and going to a place you dislike to do a job that doesn’t make sense, can be really dark sometimes.

It’s definitely been a struggle, but I’ve been trying harder to think about only the positive things, and to post only positive things. Of course I still have my occasional flare-ups… but I like to think that I’m doing better. Quitting that job buoyed my mood instantly. Being friends with positive role models (people with sunny dispositions like Christy or my infallible Walt) has helped a lot. And someone I met this year sent me a message that said:

I’ve been thinking more and more lately about how I want to be a small business owner and how it’s women like you who show me how it’s done, not only how it’s done well, but how it’s done elegantly. Thank you for being such a wonderful source of inspiration.

which makes me think that I’m doing better.

And it’s interesting because I recently worked with someone who was in a constant state of negativity. There was a fault in everything and everyone. I thought, “Wow. Is that what I sounded like?” I listened to the rant, smiled, said something cheery like, “I don’t think it’s that bad!” (yes, I’m that hippie-dippie person), then focused my attention elsewhere, like maybe on food or something.

I honestly don’t know how to give pointers on how to change your mindset, as I think it’s a daily game of tug-and-war of light and dark in your head. So here are my humble suggestions.

And maybe find something that brightens up your day, like a good nail polish shade, your favorite pair of comfy pants, a comfort movie, or blasting loud music on your headphones. And know that one horrible thing that happens is not the world crashing down on you, even if it feels significant when it happens. 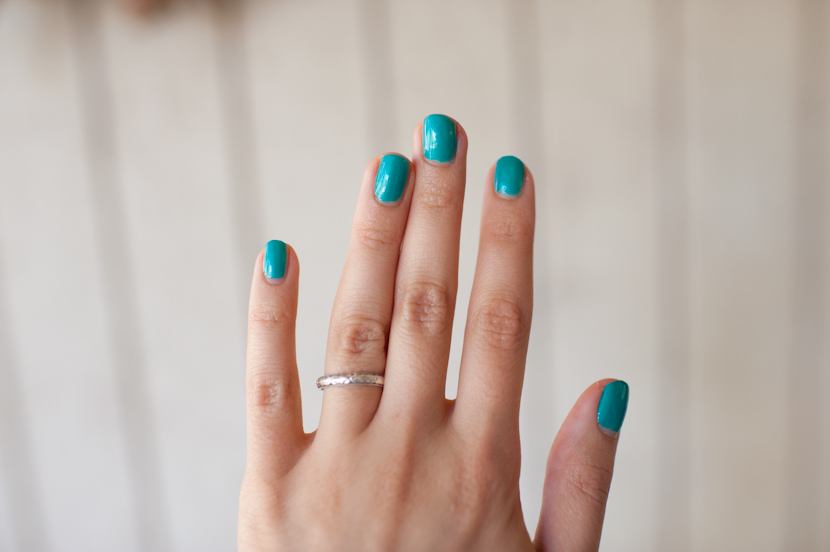 Did you miss these posts?
Angelica & Christopher’s beautiful modern wedding at the Studio at Fischer
The “Shame” Drawer (a collection of polish — I’ve got a small problem there)

this post is brimming with positivity :) i know it’s easy to just slip into ‘complain mode’ but negativity breeds negativity and we’re the only ones who can get ourselves out of our own slump. deffo agree that good coloured nails and even great music can change one’s mood. here’s to more happy (and satisfied) times!

Great post! I agree, flipping things around helps a lot, as does exercise. And having pets that make you laugh, even if sometimes they make you scream/cry because they’ve destroyed your favorite shoes. I just think, ok, this is only one bad point in my day, and the rest of it has been fine. The world hasn’t ended. And it also helps just to get up and go outside or walk to the bathroom and back (like at work).

I loooooove this post! (You knew I would!) ;-) I’m happy I’m a positive role model! Yay! Although it should be known, I have my angsty days too (as you know). But I try to stay on the positive side of things… :-\

I was thinking about how we all spew every thought positive or negative into cyber space regularly on Twitter & FB. As James says… The problem with social media is that everybody thinks their most insignificant thoughts and feelings are significant enough to share with the world. When people used to just keep that crap to themselves.

haha. I get the point. Clearly it is nice to vent now and then… but in general I try to keep things positive because nobody wants to work with a negative nancy. Plus, put positivity out into the world and you will get positivity in return. It’s science. (Or so I say.) ;-)

Balancing the stream of positive to negative in my online life is one of the hardest things, I find. Intriguingly it’s been my experience that with few exceptions (weddings, newborns), negative news tends to get more social feedback than positive news. Misery loves company?

For me, I mostly try to stay positive, but nobody likes a RAH RAH EVERYTHING’S GREAT type anymore than a Debbie Downer. Real life is somewhere in the middle: where good things happen and bad things happen. I think it’s relatable to bits from both sides. I want my followers to know that I’m a real person with ups and downs, not a cocktail-swilling glamazon with a perfect life, gallivanting on their dime.

1) I love your strength, you’re awesome and very inspirational and a great person to be around
2) I know HAVE to have that nail color! AH! Beautiful.
3) Happy people just don’t kill their husbands.