People ask me how long I’ve been shooting weddings. Right now, I can answer with, “One year.” It’s not quite that long, and I suppose if you count the time I was sixteen and helped my father shoot my second-cousin’s wedding in Bar Harbor, Maine, I could say ten years. (But I won’t.)

“But you’re really good! How did you get so good so fast?”

(Let’s brush aside the part where I say thank you, and go on to…) Years of training, my dear Watson. I thought I’d write about how I got started. Really started.

This reminds me of an anecdote that has cropped up in artistic circles:

Legend has it that Pablo Picasso was sketching in the park when a bold woman approached him.

“It’s you — Picasso, the great artist! Oh, you must sketch my portrait! I insist.”

So Picasso agreed to sketch her. After studying her for a moment, he used a single pencil stroke to create her portrait. He handed the woman his work of art.

“It’s perfect!” she gushed. “You managed to capture my essence with one stroke, in one moment. Thank you! How much do I owe you?”

“B-b-but, what?” the woman sputtered. “How could you want so much money for this picture? It only took you a second to draw it!”

To which Picasso responded, “Madame, it took me my entire life.”

Because, the truth is, I didn’t decide one day, “Hmm! I think I’ll shoot weddings. What I need is a camera and some models.” It was more of a gradual thing, something that crept up on me after I’d had my own wedding and our wedding photographer gave us such an amazing experience, and I thought to myself, “Wow. I could take the training I already have and apply it to shooting weddings…”

I was an artistic and introverted kid. I liked reading books, drawing cartoons, and making up silly outfits. Claudia Kishi from The Baby-sitters Club was my childhood idol, because she was Japanese-American and liked art, just like me. (Though, unlike Claudia, I’m a good speller and I liked school.)

When I was 14, I was accepted to the High School for the Performing and Visual Arts (HSPVA) in Houston. Imagine the high school from FAME but with an art department, and that was my school. Six hundred students, all immensely talented in theater, dance, music, song, and the fine arts. It was not unusual to take a short stroll during school hours and see musicians jamming out in a stairwell, vocalists singing at the top of their lungs while getting books from their lockers, student-created paintings hanging on the walls, modern dancers in tights and leotards leaping about in a graceful frenzy… At the end of the year, all of the graduating students would showcase their talents in their senior recital/senior show, and most of them got hefty scholarships to art colleges across the country. 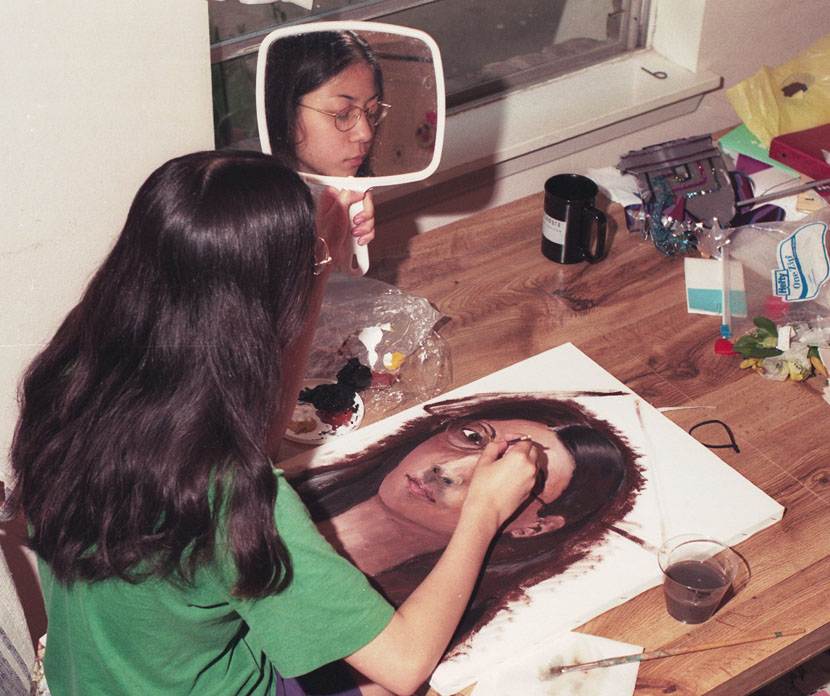 Admit it. You’re pretty amazed by my paintin’ skills at 15. Although, I remember when I wrote in my journal about the painting later, I said, “I made myself look like a girl Harry Potter!”

It was no surprise that I loved photography. My father is a photographer and pretty much single-handedly shot his entire high school yearbook. (In fact, he met my mother by bumping into her while shooting a pie-eating contest during high school. A story to be shared at a later date.) Everything about photography was wonderful, even down to that cat-pee smell of fixer.

I fell in love with Francesca Woodman, Aaron Siskind, and Anna Gaskell. It’s no surprise, then, that most of the things I chose to photograph were old buildings, interesting textures, and self-portraits.

Both of the photos above are by my dad

Of course, this meant that I was used to slowly composing my photo (buildings rarely move, after all) or taking an entire roll of film just to get one shot of my back that I thought was good enough to print on giant pieces of matte fiber paper. But I also had the awesome gift of being able to see things in rectangles. When I was really “on,” my surroundings were always distilled into compositional elements. It was kind of a trippy way to live, actually.

I was accepted to a number of art universities, but I never thought I could make money shooting. I didn’t want to be a newspaper photojournalist, I didn’t want to shoot products, and it never crossed my mind to ever shoot a wedding — it sounded so stressful, and at the time my only exposure to wedding photography had been through my dad’s experience in Bar Harbor, and in movies. Shooting a wedding on film seemed daunting and expensive. In the end, I moved to Austin to go to the University of Texas and I studied history. I barely shot anything except my typical college exploits, though when I went to Europe I brought a film SLR and a point-and-shoot and regained my ability to see in rectangles.

After planning our own wedding, and having such an amazing wedding photographer, the possibility opened up. Could I… Would I… Do I really want to?

I knew I had to shape up, hone my skills, develop quick reflexes, and have a much higher hit rate…

This sentence is win: “When I was really “on,” my surroundings were always distilled into compositional elements. It was kind of a trippy way to live, actually.”

Credit where credit is due: As photo editor of our senior yearbook, I shot many, printed most, and stood responsible as the editor of the photographs in our senior yearbook. Three talented fellow students: Spence, Jordi, and Char also shot and printed for the book and we published a handful by off-staff photographers. Many of those photographs wouldn’t have happened had it not been for our editorial staff who conceived many, arranged most, and helped select all the images we published.

Thanks for the clarification, Dad :)

I LOVE this! So many things I’m learning about you! And while I didn’t go to a fancy art high school (we didn’t have those where I come from… Haha), I would have been right at home with you there because I took part in every form of art possible at some point in my life… singing, theater, dance, drawing, ceramics… and obviously, photography! So I’m WAY jealous of your high school. That sounds AMAZING! Can’t wait to hear part 2!

Christy – I feel the need to explain a bit… You could audition for only ONE art area and that’s what you worked on. So I can’t sing, dance, act, or play a musical instrument. All I know is the fine arts… and of that, my concentration was photography… I hope you don’t think I was *that* talented!
For most people, high school was a nightmare, but I LOVED my high school.

I love it when people share their stories of how they got into wedding photography. Also – I am so jealous you went to an arts high school! There was one in my area, and I was absolutely desperate to go there, but it never worked out. That is so cool.

Thanks for sharing this! It’s so interesting to see more about the person behind the pretty wedding photos :)