It’s been over a year since the last Hello, Friday, and I think it’s about time we brought it back!

So for those of you newer, uninitiated readers, “Hello, Friday” was a little weekly wrap-up where I’d talk about things that I did, saw, thought, or enjoyed over the week — be it a movie I recently watched, the nail polish color I wore, and so on. I feel as though Hello, Friday may need better structure, but because of the unexpected nature of my life (which can be very exciting sometimes, and very boring other times; it ebbs and flows), I’m not sure if we can count on consistency there.

Somehow, I was exposed to Tove Lo (probably from the Hunger Games: Mockingjay Part 1 soundtrack) and downloaded her entire album. It has been on repeat for days. It’s girly but not sappy; boppy but not poppy. I think the single out right now is “Talking Body,” but the entire album is a gem. (Note: I haven’t watched the entire music video, but like most modern music videos, I’m going to assume it’s probably a little bit racy, especially due to the content of the song. And there is some swearing in the lyrics :) )

So I was paging through my old journal, as I sometimes do, and found this entry from January 21, 2010:

This may be something and it may not be. But I don’t want to announce my intentions to the world only to have it fall apart later as a failure. So I am quietly stating what I am planning on doing.

I am going to try to do photography as a profession. And work towards it slowly. Baby steps. I’m still going to work at the state (unless I find something better in the meantime) while I build up my portfolio and a website… shoot weddings and portraits on the weekends… and hopefully in a year I’ll have enough stuff to set out, garner clients, and quit my day job.

I don’t know if this is my dream, but it’s closer than what I’m doing now.

I can’t help but be really scared, even though I have a safety net. And that fear is: am I even good enough? Am I wasting my time chasing this?

It’s interesting that so much has changed in the last 5 years, and how much stuff hasn’t changed. I was able to quit my job, though it took much longer than one year. And it took a lot longer than I expected, too, to feel more confident in my work (though admittedly, some days I’m still worried that I’m going to wake up and realize that I’m not sure what I’m doing. This usually pertains to taxes, but sometimes photographs as well). The only thing I can really do is to be prepared and to keep an open mind about things.

I announced (also quite quietly) on my blog a few months ago that I wanted to write a book. It took a while for the wheels to turn and to outline my project, but I’m actually doing this. I hope to write a large chunk during this slow season (it picks back up in March!) and hopefully you’ll follow along. As of right now, the book is untitled, and it has nothing to do with weddings. Ha!

NaNoWriMo it is not; I’ve been trucking away on it slowly, and currently have only a little over 7,700 words. But they’re good words, and I am excited about them! I expect that in future Hello, Friday installments, I will announce larger numbers. Crossing my fingers.

• My sister posted this on my Facebook wall, but I’m such a cat lady that I had to share it. Cats smooshed on glass! I have done something similar when “The Cat Scan” was making its way around the web a year or two ago, but I will always love the smooshy hindquarters of cats. 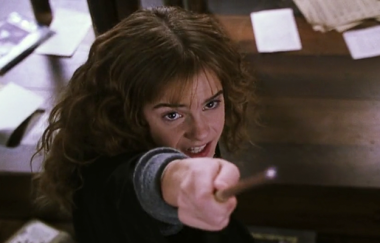 • This was making the rounds on Twitter early this week, but I love it still. A Buzzfeed article that is actually on point and amazing: if Hermione were the main character in Harry Potter. #bosswitch!

My favorite quote: Sensing this might be her last night on earth, Hermione kissed Ron. She didn’t have time to explain that this was not a binding contract guaranteeing a future involving marriage and children. Sometimes a kiss was just that. Because even though she loved Ron then, I am still a little “eh” about that epilogue.

• I had no idea that I was so old and uncool. Here’s an article by a teen on how to use Instagram. (If you’d like to follow me on Instagram, you can find me here. I’m sure it was uncool for me to link myself, but my target audience is a little older, and maybe you’re just as confused by technology as I am.)

• Beautiful concept art: if Apple made milk cartons, and other super cool imaginary packaging. Great for design nerds, and for people like myself who just really like nice packaging.

• Also, I was really scared that all BBC shows were going to disappear from Netflix streaming, but they re-licensed! Walt loves to re-watch Sherlock over and over, and I had just started Luther the other week, so I’m happy that they’re safe! It was a tense few days as I crammed as much programming into my eyes as possible. (hat tip: Tahlia)

• And in case you missed it, I blogged two things this past week:
Texas Capitol Building elopement! // A backyard proposal!

What are you currently binge-watching on Netflix? Do you have any good book or music recommendations? I hope you have a wonderful week!

Hah, I just started doing these kind of weekly reviews too! I don’t know about anyone else, but I think they’re fun.

Good news, re: Netflix & BBC. I know my friend was worried about that. I’m finally starting in on the first season of Tyrant, which I have been saving on my DVR. I’ve only watched the pilot and have so many mixed thoughts/feelings though… Well, we’ll see what the next couple of episodes bring.

I LOVE your old journal entry. That’s amazing! And I can totally identify with it, haha.

Can’t wait to hear more about this book…! ;)

Kristan, your round-up post (as well as a few of my other blogger friends’ wrap-ups) inspired me to start up Hello, Friday again!

I’ll definitely keep you in the loop about the book :) You’re way more experienced in that field than I am, heh.

Leave a Reply to Kristan