While I was growing up, I straddled two cultures and visited Japan every summer in elementary school. As a child, I fell in love with the anime Sailor Moon from the moment the pilot aired.  I got my grubby little hands on the Japanese manga books, trading cards, videocassettes mailed from cousins overseas, and my obsession blossomed to nerd-tastic proportions. Over my formative years, I spent a lot of money on Sailor Moon merchandise, so when word trickled down the grapevine (in my late twenties) that there was going to be a re-boot of my favorite childhood animation, I was ecstatic.

Although I wouldn’t say that the new Sailor Moon Crystal is a real re-boot. It’s more of a re-do, to translate the manga into an anime more faithfully. The old 1992 anime was full of filler episodes that showcased villains-of-the-day, and with 200 episodes spanning several years there’s a lot of extra fluff. It looks as though each episode of the new Crystal will follow the old manga acts without too much distraction, though it’s hard to tell from just the first episode.

All of this leads to my really nerdy blog post that has nothing to do with weddings. The new Sailor Moon Crystal (available to watch for free on Hulu!) means I have a great excuse to pull out my old manga books and the old anime, watch and re-watch, and write a blog post that compares and contrasts. Let’s go!

So first, let’s talk about artistry. The new show is beautiful and looks a lot like Takeuchi Naoko’s original art. 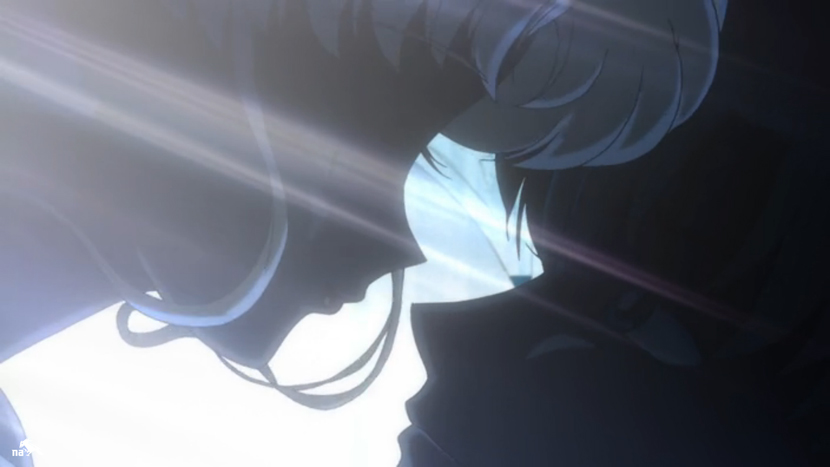 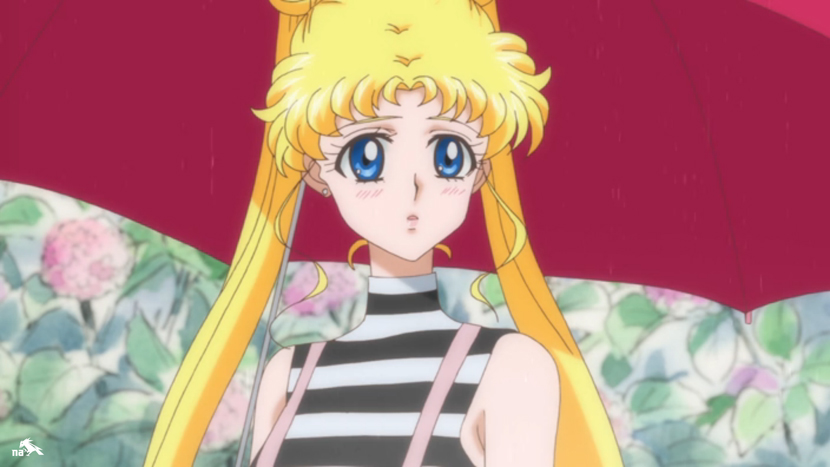 The title cards themselves are absolutely gorgeous. I love how the episode names are the same as the original manga as well, which makes me think that the next episode won’t be filler with Usagi learning how to be more like Sailor Moon, but instead will introduce Sailor Mercury (as the manga does).

Plus we got that little teaser at the end of the episode with Ami (seen from the back only) standing in the rain, so… 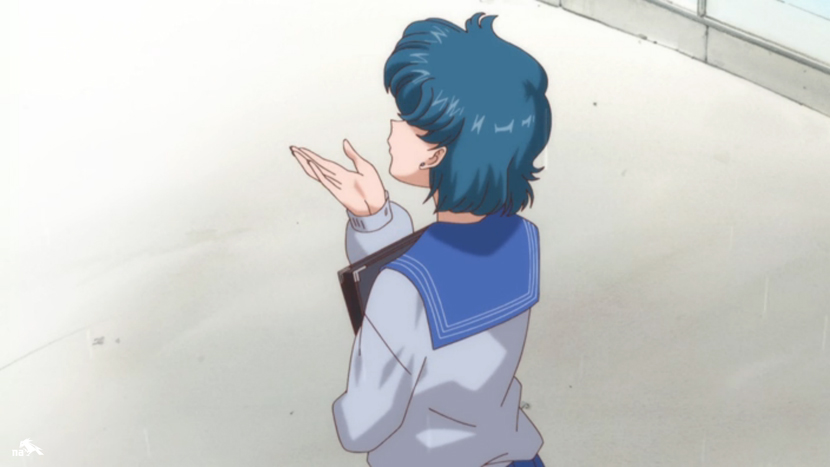 Crystal follows the manga almost word-for-word, and sometimes even frame by frame. Which I love. There’s something lovely about Takeuchi’s original layout being shown in motion…

Like Naru, talking about her mother’s jewelry shop having bargains on gemstones: 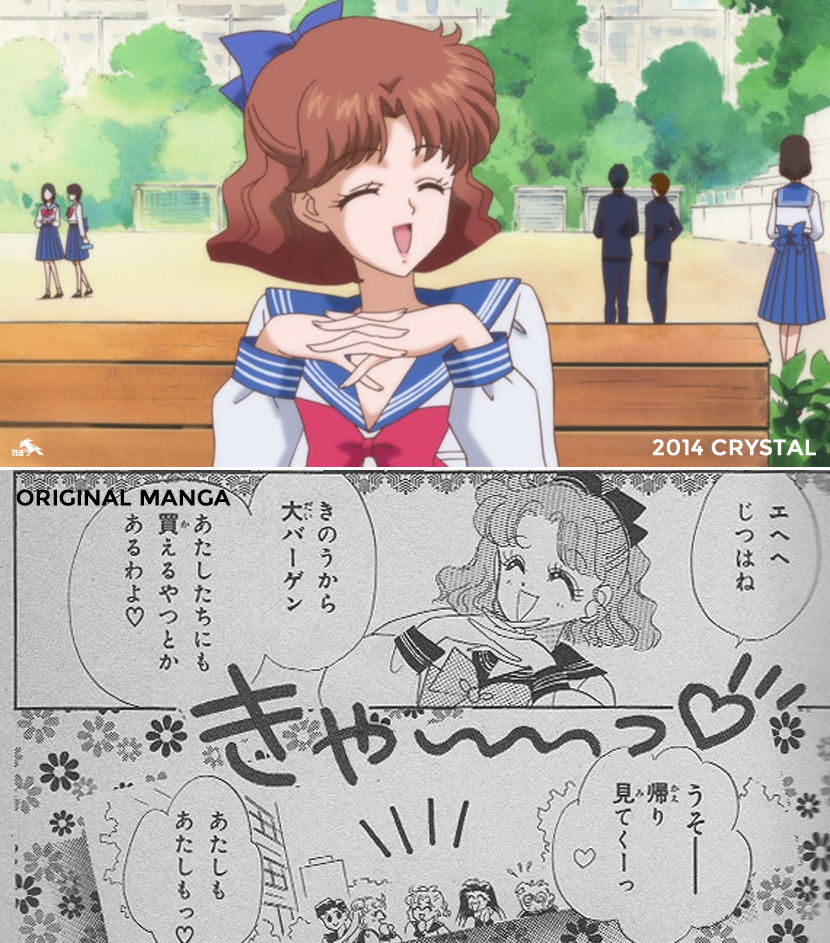 … and then the girls peering in through the window to see the diamonds (the 1992 anime had only Naru and Usagi going to the shop, with nameless friends nowhere to be seen): 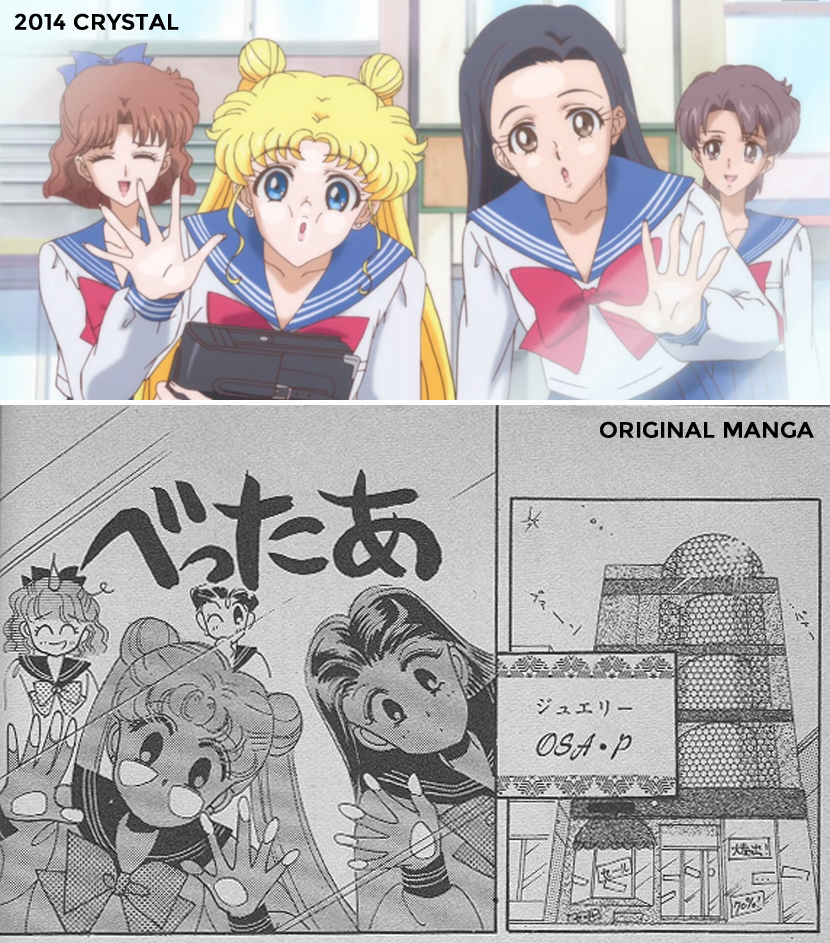 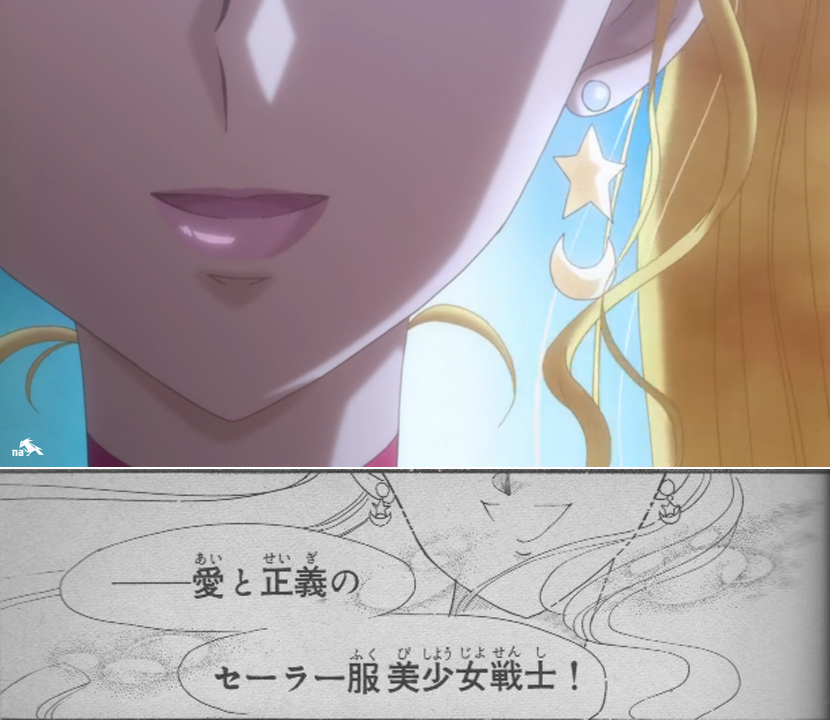 And we meet Mamoru too. I love how he’s wearing a tuxedo like he did in the manga. (No one noticed this random high school guy wearing a tux in the middle of the day?) What I loved about the new Crystal is that, like in the manga, you don’t know who he is or what side he’s on. Sure, we see his profile at the very beginning when Usagi is dreaming about a princess, but it’s still nice to have the faint aura of mystery about him rather than showing him as an ally immediately. Here the viewer wonders why this tuxedo-clad man is looking for the same crystal that the evil dudes are seeking.

Though I did find it strange that the Crystal writers started off with an immediate “I recognize her!” “I think I know him!” startle from both parties in the new show. It’s much more subtle in the manga and handled better in the 1992 anime, where Usagi, humiliated by Mamoru’s joke about her bad grades and funny hair-do, thinks he’s a weirdo, but she gives a backward glance anyway. With the insertion of Usagi’s dream of Endymion at the very beginning of the pilot, the love story seems to be a much more obvious arc. 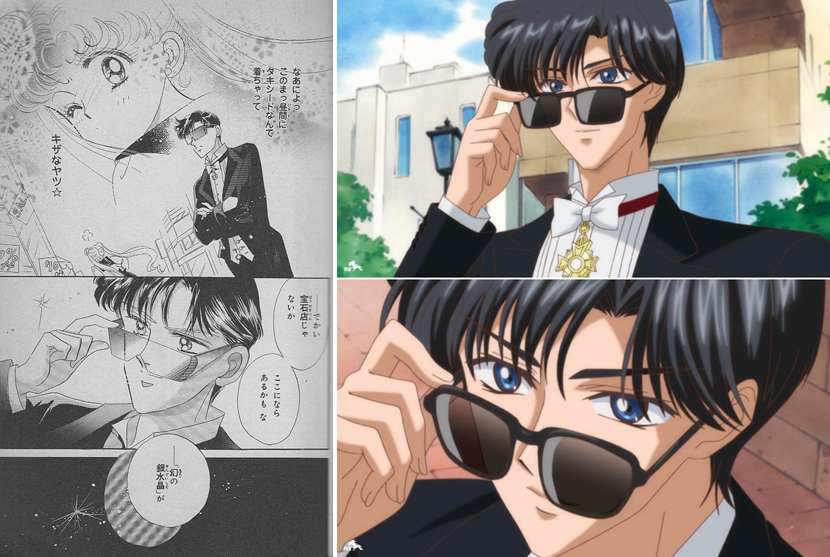 See: the haze of romance and wide-open startled gazes in the 2014 Crystal vs. Usagi’s plain hatred in the 1992 version: 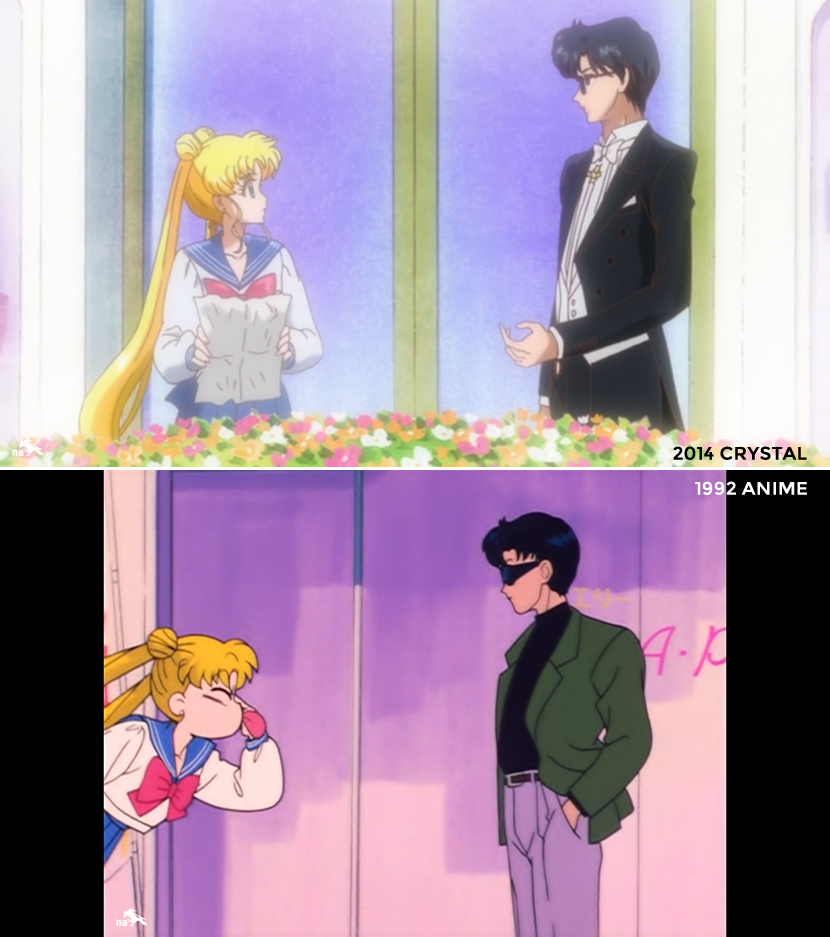 What I do miss are the fun faces that the 1992 anime used. It’s easier to like Usagi when she’s crying, sticking out her tongue, or screeching about how something hurts, when she is drawn with exaggerated features. Usagi isn’t the most likable protagonist at the beginning of the series, so that was a way to endear her to the viewers. Even the manga had funny faces. The closest we get is Usagi’s “I must be dreaming!” face when Luna speaks for the first time. 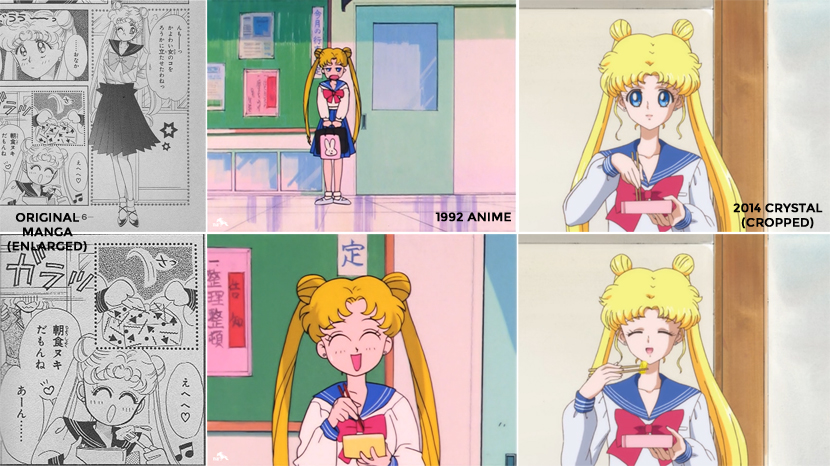 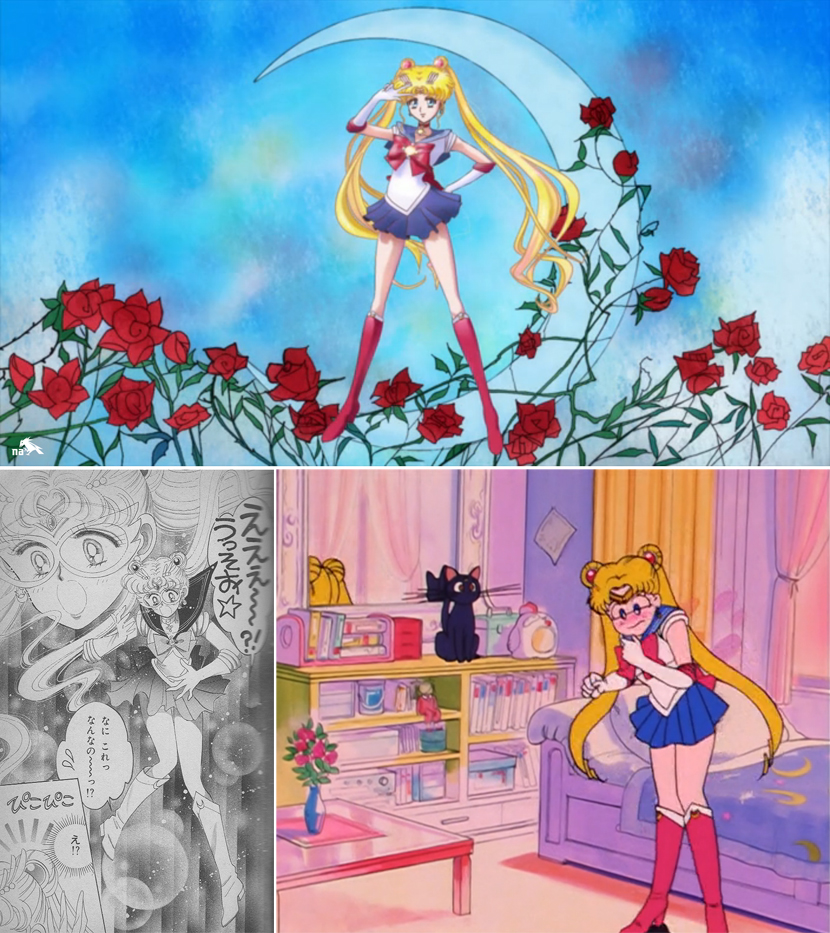 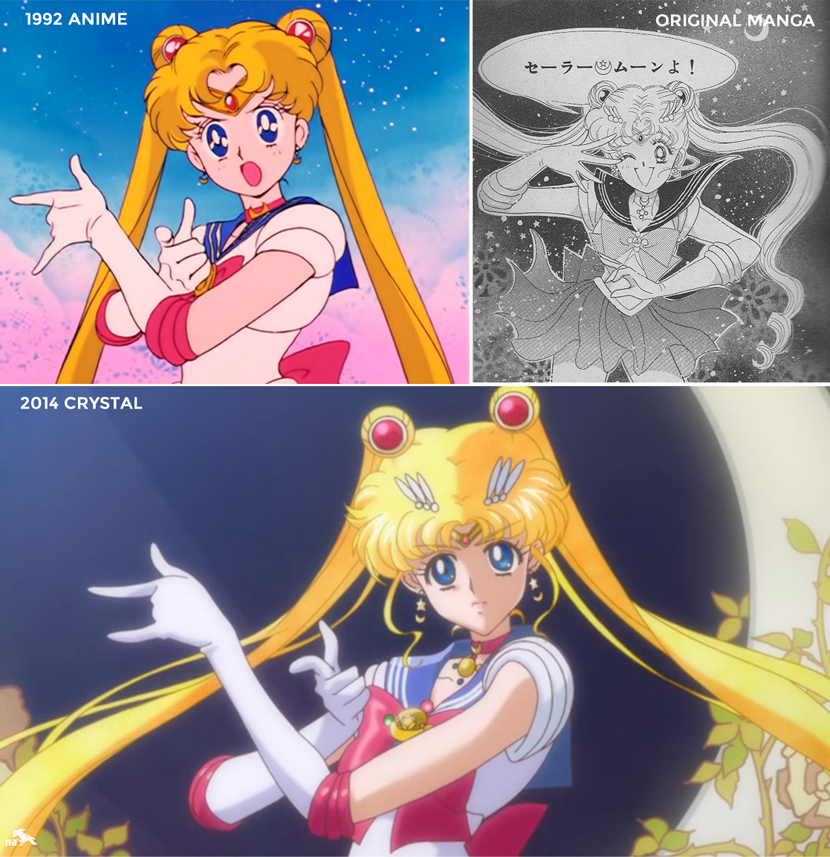 In closing, my inner 8-year-old is squealing with excitement. Did you watch the new Sailor Moon Crystal? What did you think? 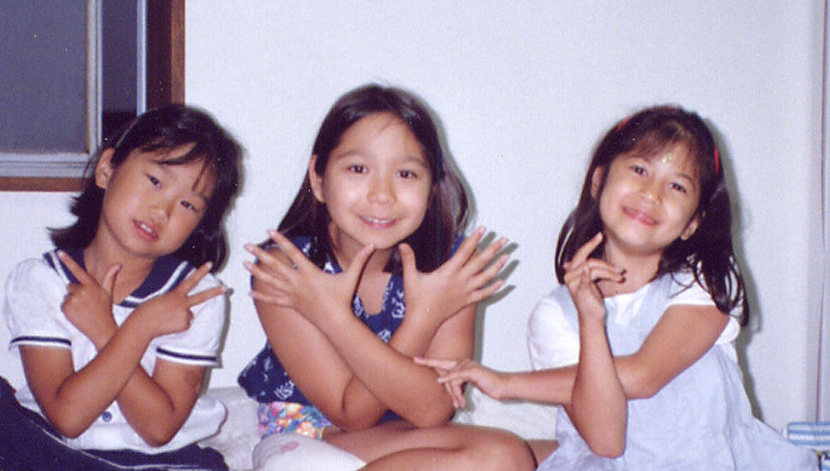 I mean, look at us, the little nerds. My cousin Tomoko (left), sister (middle), and me, making Sailor Moon hand gestures in 1990s Japan.

All images are copyright to their original creators. I screenshot the anime(s) and scanned my old books! Writing is all mine though.

Very nice write up, I felt the same way while watching the first few episodes, it was like watching a moving manga. I really enjoyed your frame by frame comparison, I had been meaning to pull my manga out of the boxes and do the same, but never found the time. I was wondering how you feel about Crystal now, looking back on the production as it’s drawing to a conclusion? But most of all I had to write when I saw that last picture, awesome!

The transformation sequences were my favorite when I originally watched this in my youth too, haha! I think the way the leotard looks in the new sequence is bizarre, especially before the skirt appears. It’s really cutoff and weird looking. You are totally right about the art though. It definitely is much more reminiscent of the manga. It’s very lovely. Argh, August has five weekends so we have to wait another week for the new episode!

Leave a Reply to Shin