I’ll admit it: it takes a lot to pry my attention away from my favorite Jane Austen miniseries adaptations. Friends who know my tastes had recommended the 2004 adaptation of Elizabeth Gaskell’s novel North and South to me for over a year. I’d placed the miniseries in my Netflix streaming queue, downloaded the book to my Kindle, and had listened to the first few pages of the audiobook before I lost interest and focused on something I already knew: another rewatch of Pride and Prejudice, another reread of Sense and Sensibility. It wasn’t until I watched the new Hobbit movie (An Unexpected Journey) that Richard Armitage appeared on my radar, and, after realizing that he was the main male character in North & South, I sat down to watch the first episode. Just the first, to see what it was about.

And then ended up glued to my couch for four hours, curled in a ball, clutching a blanket, and squealing at the television, “Tell him! Tell him!”

Maybe I’ve watched P&P too many times and the sheen has worn off. I can recite all the dialogue. My heart still lifts and falls and lifts again, but it’s not fresh anymore. This! This was new. I didn’t know the story of Margaret Hale and John Thornton before this, and it is wonderful.

It’s a similar story as Elizabeth Bennet’s and Fitzwilliam Darcy’s, what with the pride and the prejudice, and his affections, and her rejection, but there are some wonderful differences. Like no Lydia Bennet storyline — I know how important it is to the plot, but because I hate Lydia it’s less than pleasant to watch her wreck everything, over and over again. It’s not just ladies sitting idly around gossiping (though there’s plenty of that around needlepoint in N&S too), there’s action! And people getting hurt! And death! And actual poverty and people who work!

If you’ve seen the new Hobbit movie, you know Thorin Oakenshield’s amazing voice singing “Misty Mountain.” Well, listen to that for four hours and see how hard you swoon. 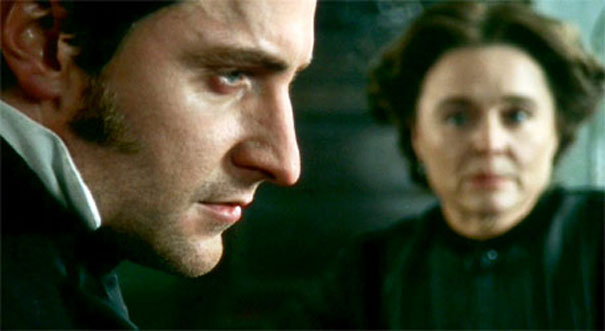 A quick summary, for those who are interested. Obviously, it’s a love story. Margaret Hale’s father decides to move his family to the north, forsaking his old career and starting over as a teacher. Margaret witnesses John Thornton, a cotton mill owner, angrily mistreating a worker who was smoking in the mill. She decides that he’s a harsh and unfeeling wealthy businessman on the spot. Even after he befriends her father and explains that cotton mills can go up in flames very easily and very quickly, she continues to dislike him, even though he grows to feel for her. Of course, he proposes one day, a la Darcy, and gets shot down. A few more misunderstandings occur, and there are many deaths! and action! and people getting hurt! and mill strikes and other political things where he’s on one side, she’s on the other, and all the while she starts to understand what kind of amazing man Mr. John Thornton really is.

It’s been a while since a movie has made my hands flail around while I tell my husband how he really needs to watch this movie with me and MAYBE WE CAN DO THAT TOMORROW (which of course he won’t), but since seeing this for the first time two weeks ago, I have watched it twice more on Netflix and then bought the DVD for myself to watch deleted scenes. (When I obsess, I do it well.)

I even read the book, which is good, but I feel the mini-series is better. 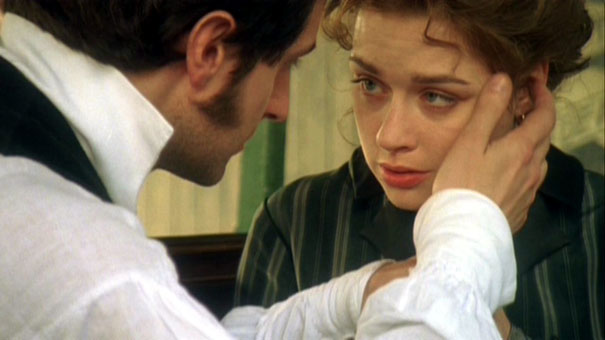 If you are someone who loves that 1995 Pride and Prejudice, do yourself a favor and watch this.

Drawn in by the unwavering lure of Elissa promising it’s like P&P… I devoured North & South this weekend for my birthday present to me. OMG IT’S AWESOME!!! It really is P&P but Richard Armitage is supppppppeeeeerrrrr HOT! That is all. :-D

I started it and never finished. I need to give it another go…

And now I need to watch!!

Leave a Reply to Polly