Here is something a little bit different for you today. Instead of introducing a relatively new love or a fledgling family, we are going to celebrate a couple that has been married for 36 years.

Michael and Karen won their session from a giveaway on A Practical Wedding. Funny thing is, they didn’t even know that they had entered! Their daughter, Nina, submitted their names and their love story back in December. 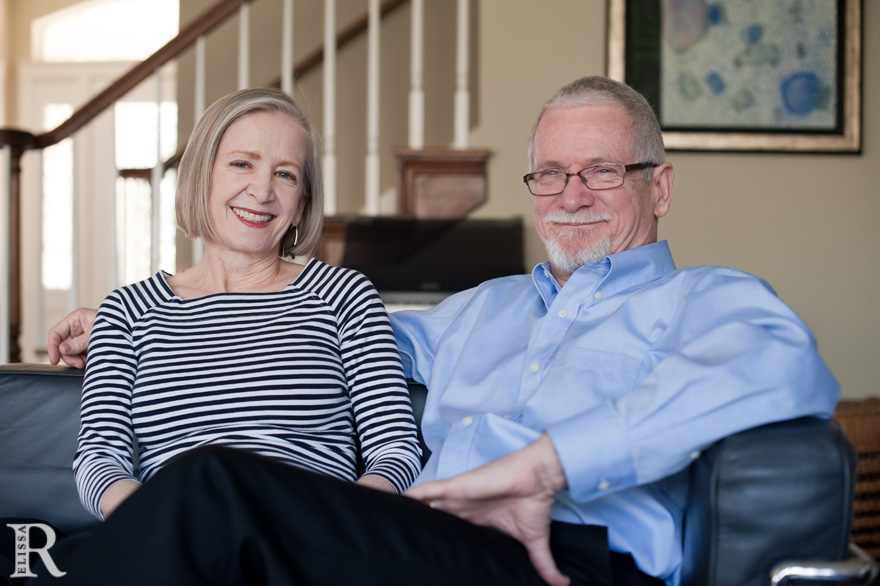 This is a little off the beaten path, but hey, in the spirit of keeping Austin (and APW [A Practical Wedding]!) weird, I’d like to nominate my parents for this awesome couple’s portrait session giveaway. My parents had the most amazing crazy elopement 36 years ago: they met as Peace Corps volunteers in Ivory Coast, and decided to get married within only a few months of having known each other. It was a crazy match at the time: my Dad’s a true southerner from Alabama; my Mom’s from NYC and second-generation from Germany. They started trying to plan a wedding long distance — imagine! it took six weeks for a letter to reach their families in the States! — and quickly became frustrated with WIC [Wedding Industrial Complex], with parents’ and community expectations, and with the sheer ridiculousness of stressing over party favors while living in a freakin’ hut without electricity in Africa. So they eloped. They grabbed some witnesses, ran down to the closest courthouse in rural Ivory Coast, got hitched, hosted a dinner for ~10 friends at a local restaurant, and sent their parents a telegram. That was 36 years ago.

One of the only drawbacks about this awesome elopement (besides returning from Africa and hoping to God that your parents like your new husband!) is that my parents have no photos celebrating their partnership, their love, or the fact that they have stood by their vows despite hell and high water. After the Peace Corps, my Dad joined the foreign service, so they have spent their marriage traveling through third world countries across four continents. They took lots of photos of each other while traveling, and there are lots of photos with their kids, but very very few with just the two of them.

My parents retired to Austin a few years ago, and Mom turns 60 this spring. I know they aren’t your stereotypical early 20s lovebirds, but I think the spirit of APW posits that committed love at any age is worth honoring. In this case, this couple stood up to WIC before it was cool and had to give up on the wedding photographs, those tangible, ageless testimonies to lifelong commitment and love. A couple’s photography session could help fix that, 36 years later. 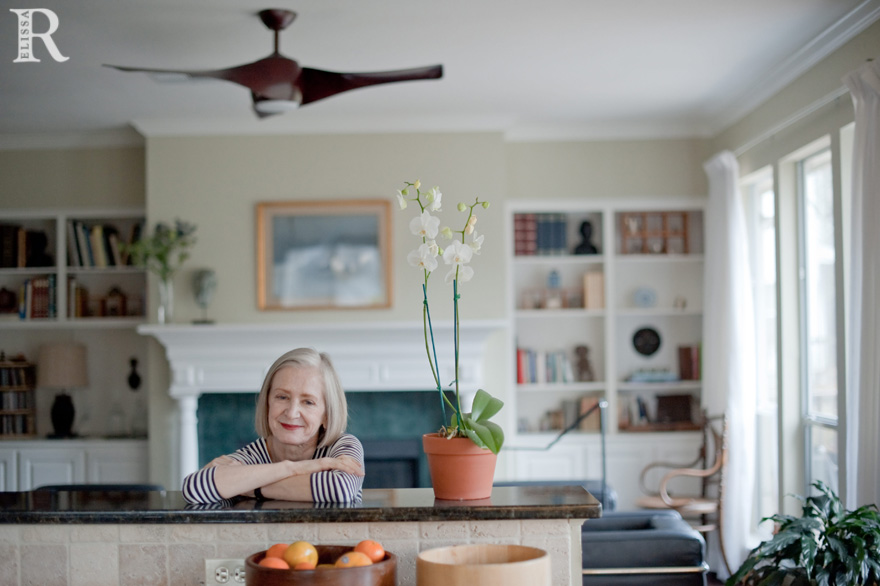 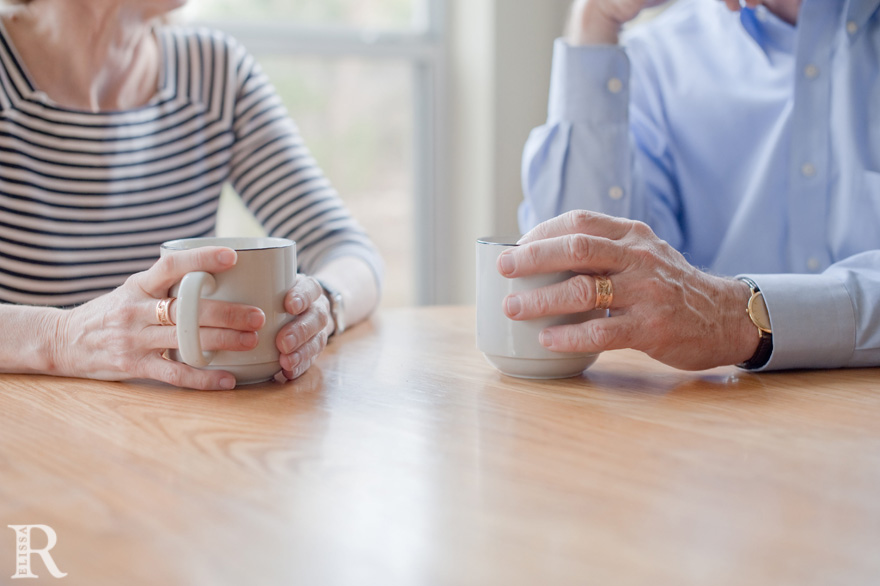 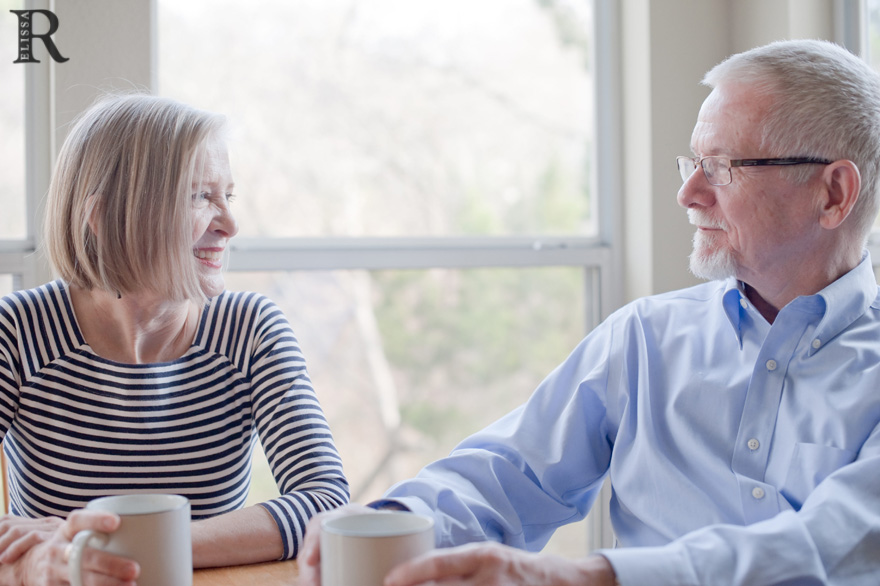 So our day began on a cold, rainy Saturday morning. Michael and Karen invited me into their Austin home and they drank homemade cappuccinos while we talked. In fact, I think we talked more than we photographed! I typically photograph my subjects while they are acting “like themselves” — I direct very little in general, as I like to be an unobtrusive presence while people come out of their shells and become comfortable in front of the camera — and during this session I let them dictate how much contact they would have with one another even more so than usual. As Karen said to me, “We are probably different from your usual subjects. I see engagement photos where the couple gazes into each other’s eyes and presses up against each other, and that’s just not us. That sort of thing may be important to them, but we don’t need that. We’re past that.”

Her statement made me think a lot about the evolution of relationships. I could tell that they were still madly in love with each other. The way they did glance at each other, chide each other, and laugh with each other. But I think that there was something in the background, a subtleness, that hinted at what helped make their relationship work. And I think my parents, who have been married for thirty years and counting, and my husband’s parents, who have about the same number of married years together, also have in common, but isn’t as apparent to young people getting married today — and that is that they have retained a lot of their individuality. I could see Michael and Karen’s youthfulness shining out of their eyes as they spoke with me. They have preserved a very strong sense of self and “do their own things” and have not completely lost themselves in the other person. Maybe that’s a “duh” moment to a lot of you, but as someone who is still navigating a still-very-young marriage (1.5 years!) it’s a good lesson to see in effect. 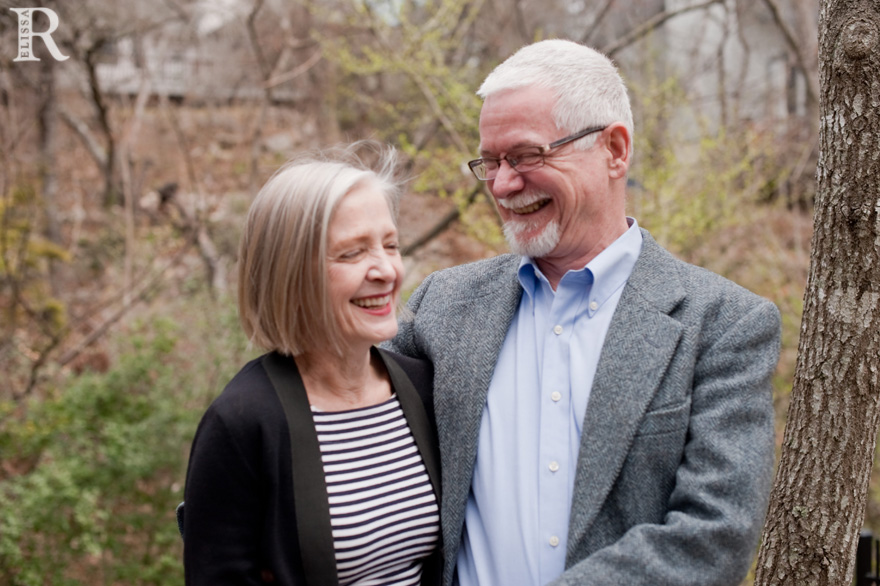 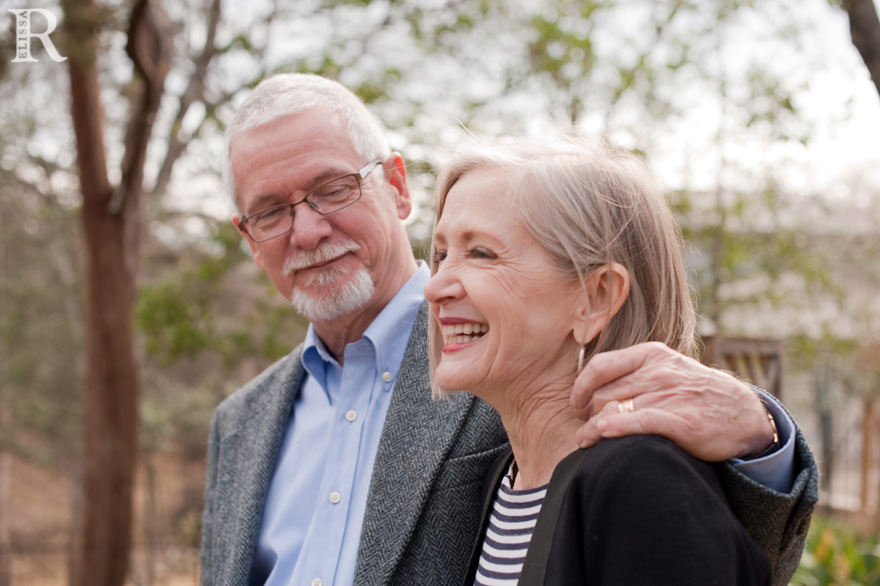 ^^ I’m pretty sure I’m in love with this photograph. When I looked through the shots I saw this one and clapped my hands. 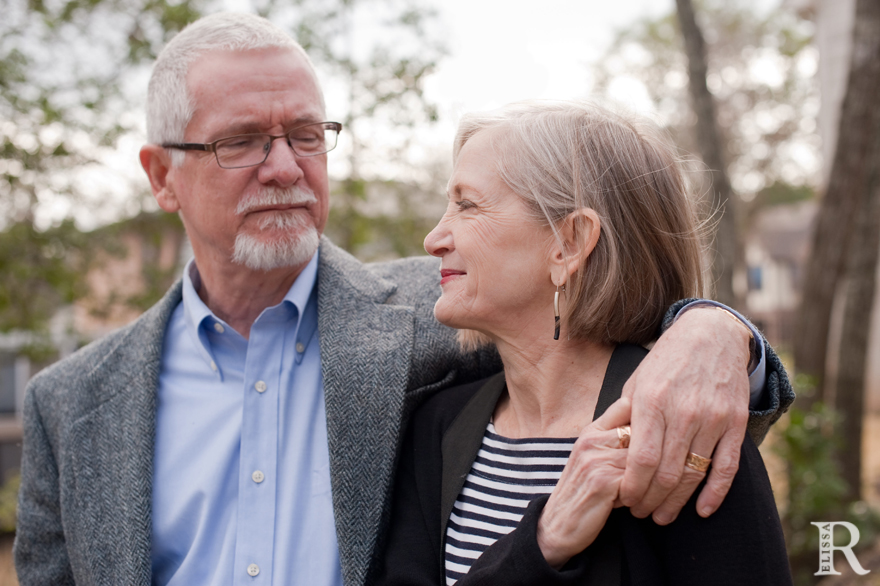 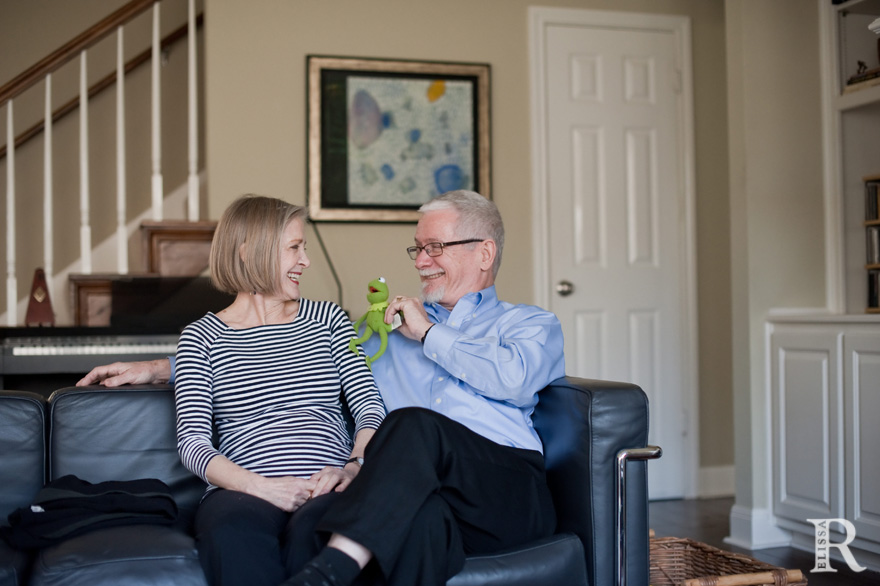 And… um… a little inside joke for the two of them. 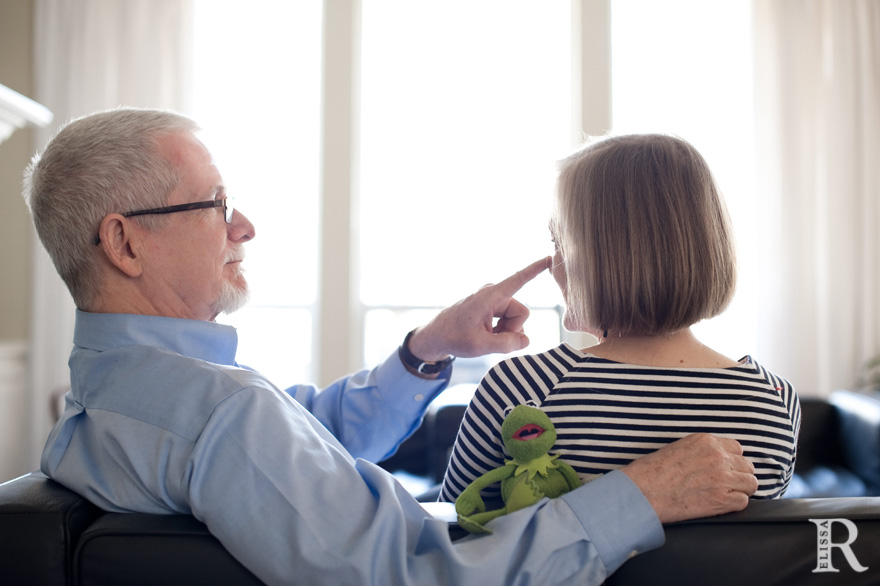 You know the one where you saw it and clapped your hands? ME TOO!

I seriously love their home. They have great style. And you did and awesome job capturing it.

Wonderful! What a gorgeous couple!

I love this session. They look like an awesome couple! I love Kermit too.

These are so wonderful, Elissa. It doesn’t hurt that they have a lovely home with wonderful light and they’re both so good-looking (how gorgeous is she, seriously?) but it looks like you truly captured their companionship and the nuances of their interaction so well. This set, to me, is true photojournalism, and it’s absolutely brilliant.

That was such a sweet gift from their daughter. I loved reading about their wild elopement. And the pictures of them drinking coffee together and with the little kermit doll are just funny and beautiful all rolled together.

Love this! My favorite is the one where you said you clapped when you saw it. I just love the adoring look on his face, and how blissful she is. This session gives us all so much hope for the future of our marriages!

What a great story and lovely couple. This made me tear up–especially the “boop!”. I hope and pray that I will have a relationship like this when I am 60.

This is such a lovely session – I adore that second photo.

Too cute! I love the Kermit photos. And what a fabulous house they have!

She is a BEAUTIFUL woman! :) Great photos, they look so happy! xx

These have a really nice natural feel to them. GREAT job.

I LOVE it. You can see how much they still love each other after all these years. And I don’t know the inside joke with Kermit, but it made me laugh anyway, because I can see that being my hubby and me in 35 years!

I want to be like that when I’ve been with Seba for 36 years. What a beautiful session.

Love this! And what a sweet story.

girl, these are awesome!! i love the richness in color and the brightness. their casual demeanor is also quite comforting. :)

I think I like the last two, and the coffee cup shot, the best!

These are lovely! I especially love that shot of Karen at the counter – great lighting there.

Aw, the boop picture almost made me cry. Love these! (P.S. I actually prefer this stuff to posed engagement pics)

Love it! Their personalities really come through and it’s nice to see you capture their love for each other after all these years.

Oh how wonderful! I love this so much! So sweet and encouraging to someone who just got married 5 months ago.

Lovely! I remember reading their story on APW and thinking it was such a perfect couple to win. Love how natural and intimate the shots are.

Aww, the intimacy between the two of them is great. I love the shot of their hands and coffeecups. And kermit!

Leave a Reply to Kat Forsyth