I’d been hearing the hubbub about The Hunger Games and its two other installments (Catching Fire and Mockingjay) by Suzanne Collins for a while and finally decided to figure out what had people in such a tizzy. I like to listen to audiobooks because I am always using my hands and eyes while I work — listening to books makes the day go by a lot faster, and I can stretch out my book experiences into days of entertainment instead of hours of frenzied reading.

In short: I really liked the first book, I kinda liked the second one, and I was very bored with the third. 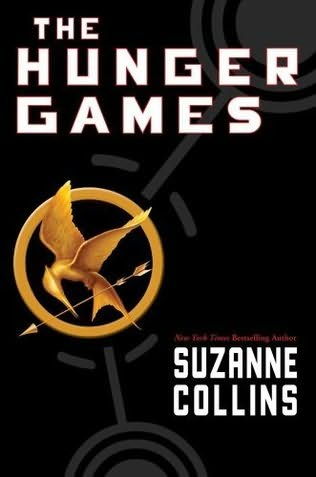 The book takes place in a distant future, of what is loosely considered the “next” America, where a greedy capitol city controls the other twelve districts in the nation of Panem. Every year the Capitol forces two tributes from each district to fight to the death in a televised reality show called The Hunger Games, to keep the districts from revolting from their oppressive rule. The protagonist is a teenaged girl named Katniss, who volunteers to take her sister’s place when her sister is selected. Apparently Suzanne Collins was flipping through channels and saw reality TV and war news coverage flash by together, and this was the result.

The first book in the series, The Hunger Games, was riveting. It was clear that Collins had a projection of what she imagined the “next” America’s priorities would be, and wrote the book with this vision in mind. I thought it was incredibly clever how she wrote the parts of most Capitol residents with disdain — people who did not understand that the Games were a reality, that people died for their entertainment, that winning (living) tributes were worthy of celebrity status, that there were ridiculous standards for beauty that crossed into the ludicrous (green- or blue-tinged skin, for instance). It’s a brilliant commentary on the state of the present-day average-American’s celebrity-worship and how entertainment like that can take the attention off of more serious matters.

But the third book was punishing. I listened to about half of it, hoping for a decent payoff, but as the plot dragged on I lost interest. Had it been a paperback, I could have blazed through it in a few hours just to find out what happened and to bring it to a clean finish, but an audiobook is a much longer commitment, and I didn’t want to waste 14 hours on it. The writing style devolved into a long series of explanations and descriptions of actions, instead of the actions unfolding in front of us. The plot became an argument about dictatorship vs. communism, and a very boring one at that. Where the first book showed a plausible world in which the use of television manipulated the way people thought or acted, and that no one was safe from death, the third book described a world that seemed impossible. A lot of sci-fi, futuristic stuff asks readers to suspend their realities, but usually gives a good reason to do so. This book did not.

Worst of all, the book is geared towards “young adult” readers so there is a lot of discussion about love and what it means, and the romantic subplot completely bogs down the storyline.

When I decided to stop listening in the middle of the last book, I ended up looking at the synopsis on Wikipedia. I was glad to have ended the book where I did.

If you are a new reader to this series, I’d suggest you read the first and second, and ignore the third. You don’t need it, and you can go on happily thinking about the open-ended question: Who wins the love triangle? Why, whomever you think is worthier, of course.

Have you read The Hunger Games and its sequels? What did you think? I’d love to hear your opinion!

I know we talked about this a little on twitter, but I totally agree with you. The third book wasn’t compelling at all. Fortunately, I was reading hard copies so I could blaze through to get to the end and find out what happens. The third book really spoiled the first two for me and left me with the overall impression that the trilogy itself wasn’t that good, but reading over your review is reminding me that it’s not true. The first and even second book were pretty good and the first one *almost* lives up to the hype.